May had a distinctly autumnal feel, continuing a pattern of below average temperatures that has persisted throughout spring 2013, while the majority of the UK received above average rainfall, according to the latest update to the UK's most authoritative analysis of water resources status. 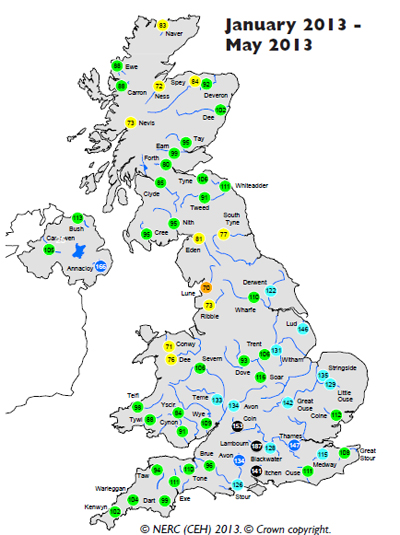 Pockets of north-west Scotland and north-east England reported more than twice the long-term monthly average rainfall. Large areas of Scotland, Wales, Northern Ireland and northern and central England received more than 125% of average monthly rainfall, and this was the first year since 2007 in which May was wetter than normal. Nevertheless, moderate medium-term rainfall deficiencies characterise much of the UK, although groundwater resources remain healthy.

The analysis is contained in the monthly hydrological summary for the UK, covering the month of May 2013. The monthly summaries are produced by the National Hydrological Monitoring Programme, operated by the Centre for Ecology & Hydrology (CEH) in conjunction with the British Geological Survey.

Simon Parry, from the Centre for Ecology & Hydrology, said, "Following the significant hydrological volatility of the three previous years, 2013 thus far has been relatively unremarkable by comparison, and the water resources outlook remains very favourable."