Much like the miners’ canaries of yesteryear, birds are once again warning of potentially damaging substances in the former South Wales coalfield, according to new research led by Cardiff University with contributions from the Centre for Ecology & Hydrology (CEH), the NERC Life Science Mass Spectrometry Facility and the University of Exeter.

Whereas deep miners once carried caged canaries to warn of suffocating gases, today’s equivalent is a detailed chemical analysis of pollutant residues in the eggs of wild birds such as the dipper. These thrush-sized birds are the world’s only songbirds to feed directly on river insects and they have proven to be excellent indicators of river health.

The new research, published in the journal Environmental Science and Technology, shows that dipper eggs along urban South Wales rivers contain some pollutants at levels, on average, over four times greater than in adjacent rural rivers and are among the highest ever found in songbirds.

The pollutants, such as PCBs and PBDEs, can persist in the environment for long periods and are among those believed to contribute to hormonal irregularities and abnormal development in fish.

Some of these pollutants are a legacy of past industrial activity but others, such as PBDEs, which are widely used as flame retardants in building, industrial and domestic materials, might still be increasing.

The new study is important in showing that such substances can find their way into water, particularly near towns and cities, and accumulate in river wildlife.

Dr Gloria Pereira, head of CEH's Centralised Chemistry Group, was among the contributors to the study.

Cardiff University issued a media release for this story. 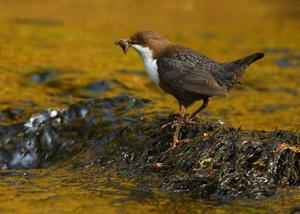