November was a damp and dull month, the dullest November since 2004 for the UK.

Although November rainfall for the UK overall was near average, there were notable regional variations. Northern Ireland and southern and eastern areas of Great Britain were much wetter than average, whilst northern and western areas of Great Britain received below average rainfall. As a result river flows in Northern Ireland, eastern Scotland and responsive catchments of Lowland England were above average, whilst below average flows characterised north-western areas of Scotland, Wales and England 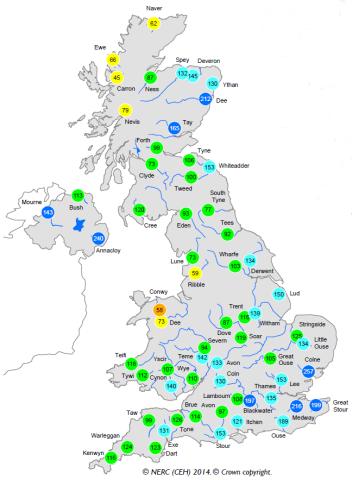 Temperatures were mild for the time of year, particularly during the first half of the month, contributing to mean January-November temperatures that rank 2014 as the warmest on record for the Central England Temperature series back to 1659.

November rainfall eradicated any remaining soil moisture deficits across the majority of the country, leading to the widespread commencement of groundwater recharge. Groundwater levels in all aquifers were average or above for the time of year. Reservoir stocks were generally near average with the exception of those drawn down for management purposes.

UK river flows November 2014: green and blue are in the normal range and above. Full key

Summary author, Simon Parry from the Centre for Ecology & Hydrology said, “Rainfall over the next three months will be influential in determining the water resources outlook for 2015, but the current situation in relation to groundwater levels and reservoir stocks remains healthy.”

The monthly summary is a look back at hydrological events occurring in November 2014. Latest information on flood warnings is provided by the Environment Agency, Natural Resources Wales and Scottish Environment Protection Agency (flood warnings for Northern Ireland are not available).

A PDF of the full 12-page November 2014 summary can be downloaded here. 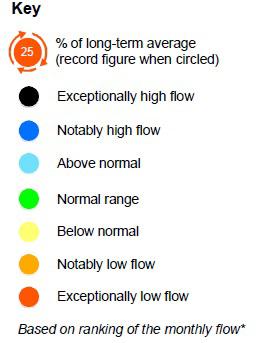