A new report published this week quantifies for Europe how much reducing meat and dairy in our diets would reduce air and water pollution and greenhouse gas emissions. The report also considers the health benefits of reduced meat and dairy consumption. 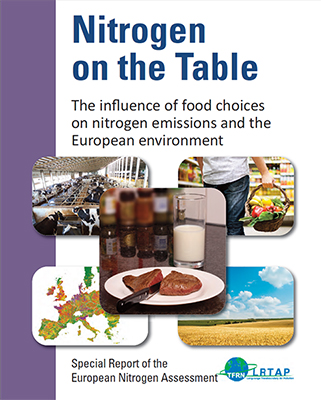 Reductions in meat and dairy, it says, would also free up large areas of farmland for other purposes such as food export or biofuels.

The "Nitrogen on the Table" report, launched at an event in the European Parliament in Brussels, follows up the European Nitrogen Assessment (ENA), published in 2011. It was prepared by the Task Force on Reactive Nitrogen (TFRN) of the United Nations Economic Commission for Europe. Co-chair of the Task Force is Prof Mark Sutton of the Centre for Ecology & Hydrology (CEH) who attended the launch event with Henk Westhoek of the Netherlands Environment Assessment Agency. The event was hosted by MEP Sirpa Pietikäinen and a response was given by Janez Potočnik, Co-Chair UNEP International Resource Panel.

The current European diet is characterised by large amounts of meat, dairy products and eggs, leading to an intake of saturated fat and red meat that exceeds health recommendations. Livestock production in the EU is the driver of around 80% of the losses of nitrogen from agriculture. These losses cause a number of environmental problems including threats to human health and biodiversity.

The report suggests that halving the current consumption of meat and dairy within the EU would not only have considerable health benefits through changes in food consumption patterns, but also achieve a reduction of around 40% in agricultural nitrogen losses and a 25% to 40% reduction in greenhouse gas emissions from agriculture.

Henk Westhoek, program manager for Agriculture and Food at the Netherlands Environmental Assessment Agency and lead author of the report, said, “The report clearly shows that reducing meat and dairy consumption to 50% of the present intake has large benefits for both human health and the environment. The intake of saturated fats would be better aligned with health recommendations, instead of being too high. Nitrogen losses from EU agriculture would be reduced by around 40% and greenhouse gas emissions would be reduced by 25 to 40%.”

Around 80% of the total emissions of ammonia, nitrate and of nitrous oxide – a powerful greenhouse gas - from EU agriculture are related to livestock production. Nitrogen on the Table report

Prof Mark Sutton, an environmental physicist at the Centre for Ecology & Hydrology, co-chair of the Taskforce on Reactive Nitrogen and co-author of the report said, “Improving our food choices to stay within dietary recommendations would have a major benefit for the environment by reducing nitrogen pollution. Our results show that realistic change in European diets would reduce pollution by 40%. This is similar to what can be achieved by technical measures in agriculture. It is now is up to society to decide what the balance should be between the two.”

"Improving our food choices to stay within dietary recommendations would have a major benefit for the environment by reducing nitrogen pollution." Prof Mark Sutton, Centre for Ecology & Hydrology

Janez Potočnik, Co-Chair UNEP International Resource Panel, also spoke at the launch. He said, “A change towards diets with a lower consumption of livestock products has clear environmental and health benefits. The question is not whether we should or shouldn’t do something, and not when, but rather how. Addressing people’s dietary choices and restructuring of agriculture are neither easy nor popular, but unfortunately it is unavoidable. Strategic planning to foster that behavioural change would need to be accompanied by active measures to address new market opportunities. The role of policy leaders is not in comfortably denying reality until an uncomfortable end, but rather in guiding us on an uncomfortable walk till we reach a comfortable end.”

Event host Ms Sirpa Pietikäinen, MEP, Co-chair of the EP Sustainable Food Systems group, said, “Our food production can be harmful for our health and for the environment. Through more holistic food policy that integrates the many aspects of food production – health, safety, environment, agriculture – we have the possibility to produce our daily meals in a more sustainable way."

The report was funded by the UNECE Task Force on Reactive Nitrogen, including from the Netherlands Ministry (WOT-04-008- 010) and the UK Department for Environment, Food and Rural Affairs, together with support from the European Commission for the ÉCLAIRE, NitroEurope IP, Legume Futures and AnimalChange projects. 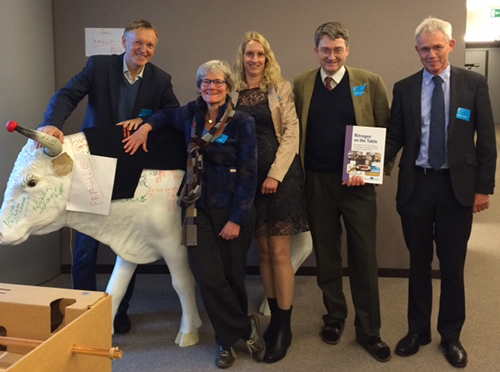