The UK results of Countryside Survey 2007 will be published on 18 November. The results will be used to support a range of objectives – from monitoring climate change and Government policy, to improving scientific understanding of the countryside. Countryside Survey 2007 is the culmination of several years of hard work carried out by the Centre for Ecology & Hydrology (CEH). The results will be made publicly available via the project website in the form of an electronic report. 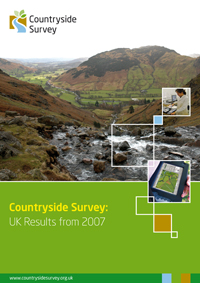 A world leading study of change in the UK countryside, Countryside Survey was established in 1978 and has since been carried out at regular intervals in 1984, 1990, 1998 and most recently 2007. The project samples and studies the countryside using rigorous scientific methods, allowing comparison of recent results with those from previous surveys. In this way, the survey provides a unique means of detecting the gradual and subtle changes that occur in the UK’s countryside over time.

It comprises two parts: the Field Survey and the Land Cover Map. The Field Survey involves an in-depth study of a sample of 1km squares in the countryside, recording information on Broad and Priority habitats; linear and point features; vegetation cover; freshwaters and soils. The Land Cover Map is a digital dataset, showing the stock and distribution of land cover and Broad Habitats across the UK at a ‘field-by-field’ scale.

The UK results from the 2007 Survey will address many key questions about change in the countryside, including:

Individual country-level reports for England, Scotland and Wales are due for publication in March/April 2009. Licensed access to Land Cover Map 2007 data is expected later in 2009.

The 2007 Countryside Survey is the biggest ever completed, involving more than 9,000 days of surveyor effort alone. Fieldwork was undertaken in 94% of all sites originally targeted - an outstanding achievement in light of the unforeseen challenges that arose during the summer of 2007; notably flooding and the outbreak of foot and mouth disease, which meant that some sites could not be accessed.

In total, 591 1km squares were surveyed across Great Britain, representing all major habitat types. The location of the study squares is kept confidential to avoid any deliberate influences that could affect them or the features within them – thereby providing a reliable reflection of changes in the wider countryside.

Fieldwork in England, Scotland and Wales was carried out by 80 field staff, supported by co-ordinators and data specialists. All of the surveyors underwent an intensive four-week training course to ensure the highest possible level of quality assurance. In addition, a team was responsible for visiting the survey squares and repeating aspects of the survey as a quality assurance check. This alone involved a total of roughly 350 days on site.

One of the biggest successes of the recent survey was the use of digital data capture which involved, for the first time, use of portable tablet PCs to record information in the field. Data was backed-up daily to avoid accidental loss and overall the process proved much more efficient and reliable than using paper survey forms, which can be spoiled by wet weather.

Of the 591 1km sample squares, 289 were surveyed in England, 195 in Scotland and 107 in Wales. A complimentary study in Northern Ireland involved the surveying of approximately 270 sample squares.

Over 9,000 days of surveyor effort were invested – roughly 25 years’ worth of study in total (undertaken between May and November 2007).

One surveyor, based in Scotland, calculated that she walked 234km, involving over 12,000m of ascent, just getting to the squares.