September 2015 was a dry and cool month in the UK. All regions were drier than average, many substantially so, with the UK registering just over half of the long-term average rainfall for September. Scotland was particularly dry; in a series from 1910 only five Septembers have been drier.

The below average rainfall meant that soil moisture deficits generally didn’t decline substantially, allowing the continuation of seasonal recessions in most boreholes. Groundwater levels generally remained in the normal range or just below.

Most catchments in northern Britain registered normal to below normal river flows, with notably low flows for the time of year in much of western Scotland and northern England. Further south, flows in many catchments remained above normal. 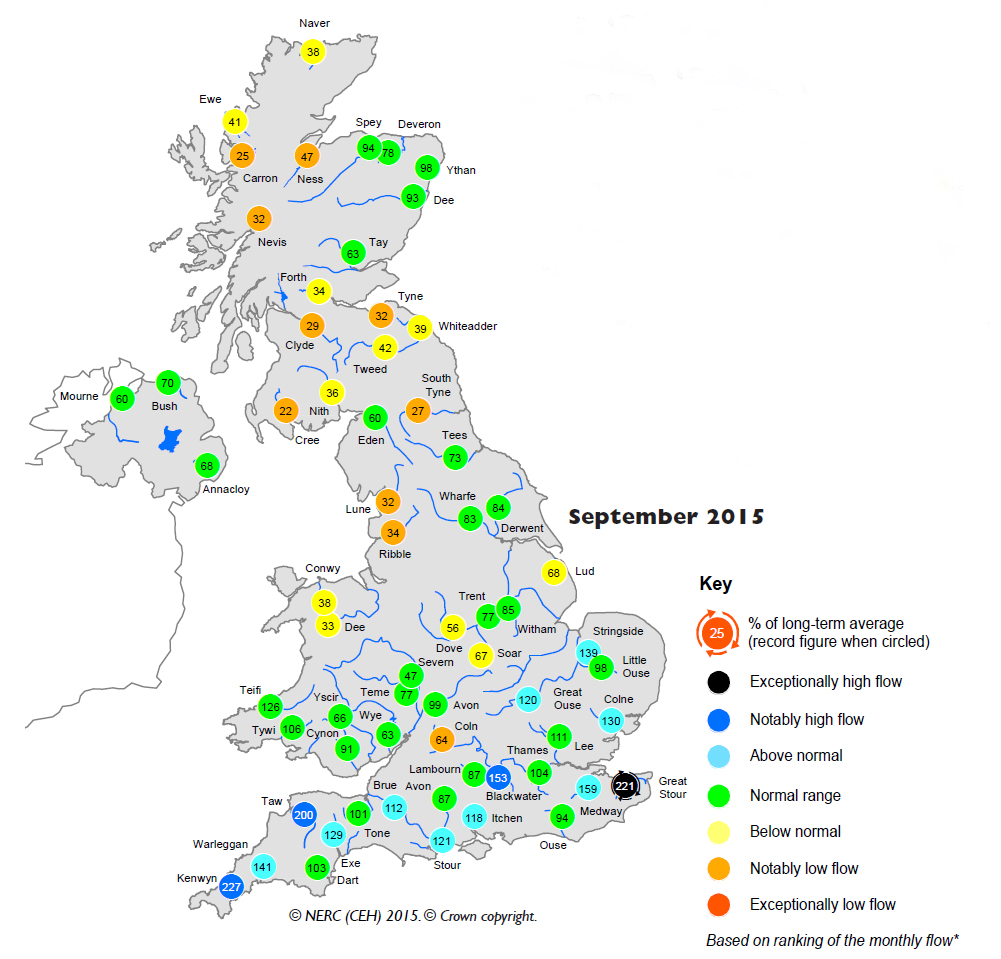 Picture: September 2015 river flows in the UK with below normal or notably low flows in some northern and western catchments.

Stocks fell in the majority of index reservoirs but generally were above average for the time of year, notably so in some impoundments in the west of the UK.

A PDF of the full 12-page September 2015 summary can be downloaded here.

Summary author Katie Muchan said, “The onset of groundwater recharge will be sensitive to late autumn rainfall but overall reservoir stocks for England and Wales remain above average. As such, the water resources situation remains healthy entering the late autumn, a time when aquifer recharge typically commences."

For the summer half-year (April-September 2015), large areas of the Severn-Trent and Thames regions registered below average rainfall, while rainfall totals were generally above average along the south coast, in Northern Ireland and parts of central Scotland.

The monthly summary is a look back at hydrological events occurring in September 2015. Latest information on flood warnings is provided by the Environment Agency, Natural Resources Wales and Scottish Environment Protection Agency (flood warnings for Northern Ireland are not available).

The NHMP also has a remit to analyse major flood and drought events in the UK and analyse long-term trends in UK hydrological data. The UK Monthly Hydrological Summary is normally published on, or before, the tenth working day, of the following month. A Hydrological Outlook for the UK is also available, and is updated monthly.

Read the full September 2015 Hydrological Summary for the UK