March, the coldest for the UK since 1962, saw marked regional variations in precipitation totals, including exceptional spring snowfall, according to the latest update to the UK's most authoritative analysis of water resources status. 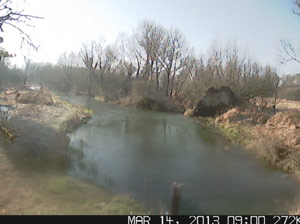 The month, which was colder than any of the preceding three winter months for the first time since 1975, saw precipitation totals generally slightly below average but displaying marked regional variations: for example, Scotland's driest March since 1969 resulted in high soil moisture deficits in the Highlands. For England & Wales, winter half-year accumulations are above average, and 12-month accumulations from April 2012 remain remarkably high.

The analysis is contained in the monthly hydrological summary for the UK, covering the month of March 2013. The monthly summaries are produced by the National Hydrological Monitoring Programme, operated by the Centre for Ecology & Hydrology (CEH) in conjunction with the British Geological Survey.

Simon Parry of the National River Flow Archive at CEH said, "The general water resources outlook remains healthy, but late spring rainfall will be very influential in determining the onset of the seasonal recessions in river flows and groundwater levels."

The latest summary also shows that end of month reservoir stocks were healthy across Lowland England, but limited impoundments occurred in Scotland and northern England. For Scotland, Wales and northwestern England, the effects of frozen catchments and delayed onset of snowmelt are reflected in river flows less than half the March average over wide areas.However, groundwater levels remain above average for the time of year.