Although February was a cold and relatively dry month, there is a continuing risk of groundwater flooding in vulnerable areas, according to the latest update to the UK's most authoritative analysis of water resources status. 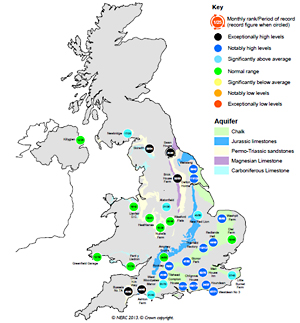 Precipitation totals fell below 50% in a few areas and, at the national scale, February was the driest month since March 2012. Nonetheless, winter (December-February) rainfall totals were generally above average, and medium term (3-12 months) accumulations remain exceptionally high.

The analysis is contained in the monthly hydrological summary for the UK, covering the month of February 2013. The monthly summaries are produced by the National Hydrological Monitoring Programme, operated by the Centre for Ecology & Hydrology (CEH) in conjunction with the British Geological Survey.