Climate change and the Thames estuary 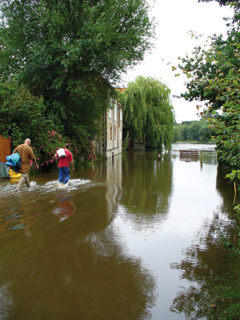 The Environment Agency commissioned climate scientists from the Centre for Ecology & Hydrology, Met Office Hadley Centre and Proudman Oceanographic Laboratory to investigate what impact climate change will have on the area over the next 100 years.

The results, released today at the international conference Climate change impacts and adaptation: Dangerous rates of change at Exeter University, confirm that current Government predictions and previous flood scenarios are realistic and have gone a long way to reducing the uncertainty around maximum water levels.

The key findings from this new research are:

Crucially, in terms of the Thames estuary, this research means that:

Speaking about the results, Dr Jason Lowe, Head of Mitigation at the Met Office said: “Having greater clarity on things such as storm surge frequency is tremendously valuable and not just from a scientific point of view. This research will help to direct investment where it is most needed to manage the impacts of climate change.”

Tim Reeder, Regional Climate Change Programme Manager for the Environment Agency Thames Region said: “This research enables the Environment Agency to continue to plan flood management investment with confidence. By narrowing previous uncertainty we now have an improved understanding of how climate change will affect the Thames Estuary and can develop realistic and cost-effective options, which will meet future needs. These are cutting-edge results and demonstrate the value of the Government engaging with the world-class scientists we have here in the UK.”

The study was commissioned to reduce climate change uncertainties, in particular the future frequency and height of North Sea storm surges on the Thames Estuary. In addition, the group answered other key questions to assist the Environment Agency to plan future flood-management investment with confidence: