Ecologists from the Centre of Ecology & Hydrology (CEH) and other research institutions are gathering today (29th April 2010) at Wytham Woods to celebrate its 60th anniversary as a site of Special Scientific Interest (SSSI).  Wytham is one of the most intensively monitored ecological survey sites in the world and the celebration, taking place at a special meeting of the British Ecological Society, will include the launch of a new book, Wytham Woods: Oxford’s Ecological Laboratory. 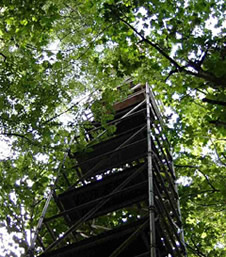 The woodland is one of the eight founding sites in the Environmental Change Network (ECN) established in 1992 by CEH. ECN now consists of 12 terrestrial and 45 freshwater sites regularly monitored as part of the UK’s long-term environmental change programme.

The current ECN monitoring at Wytham Woods contributes to environmental research by providing a range of high frequency environmental and ecological measurements that are used to identify change and explore the causes of change, both within the site and between ECN sites across the UK. CEH scientists also carry out shorter term research projects at Wytham including ongoing experimental work into woodland ecosystem dynamics.

“The book details the depth and understanding we have of a place that is more than just a beautiful wood."

Wytham Woods has long been used for important ecological research led by Oxford University. A magnificent tract of semi-natural deciduous woodland, it was one of the UK’s first designated SSSI sites in 1950. It continues to be the focus of numerous long-term monitoring projects and collaborative research conducted by the University, CEH and other research organisations interested in monitoring environmental change and ecological processes.

Wytham is clearly more than just a beautiful place. The 350 ha wood has played a key role in training generations of British ecologists, and the results of their long-term studies are helping address many of the most important questions facing wildlife conservation today. Ecological studies range from how trees cope with drought, to the effect deer grazing has on the woodland plants. One example of this is a recently funded CEH project called Fragmented Forests in a Changing Climate, which is looking at the effect of woodland edges on forest carbon and water balances.

The ecological value of Wytham Woods is enormous, said Michèle Taylor from the Centre for Ecology & Hydrology. “The publication of Wytham Woods: Oxford's Ecological Laboratory demonstrates the important link between the CEH science on the site and that of Oxford University and Natural England.”

“The book details the depth of knowledge and understanding we have of a place that is more than just a beautiful wood – it is an excellent summary of CEH’s work at Wytham Woods over the last 17 years,” she added.

In the new book's preface Professor Lord Krebs, who began his research career in 1966 by studying Wytham's great tits, says, “If there were a Nobel Prize for Ecology, and if you could award it to a place rather than a person, Wytham Woods would surely be a prime candidate. It is almost certainly unmatched anywhere in the world as a place of sustained, intensive ecological research extending over nearly three-quarters of a century.”

The book was launched at a special meeting of the British Ecological Society's Forest Ecology Group at Wytham Village Hall on 29 April 2010.