The United Kingdom was elected to the Intergovernmental Council of the International Hydrological Programme (IHP) at the recent 37th session of UNESCO's General Conference. The UK National Committee for the IHP, with its secretariat at the Centre for Ecology & Hydrology (CEH), coordinates the UK contribution to the Programme.

Chair of the Committee and CEH Deputy Director, Professor Alan Jenkins said, “We welcome the UK’s return to the IHP Council. It places CEH, and the UK as a whole, in a strong position to help influence the global advancement of hydrological science and the subsequent development of freshwater policy and management practices.”

A specialized agency of the United Nations system, UNESCO’s remit covers education, culture and the sciences. The International Hydrological Programme is the only scientific intergovernmental programme in hydrology and water resources within the UN system, providing freshwater research, policy, education and capacity building initiatives in many of UNESCO’s 190 Member States.

The 36-member IHP Council oversees the planning and implementation of the IHP and the United Kingdom joins Germany, Netherlands, Switzerland, Sweden, Greece and Turkey as representatives of the Europe and North America region.

Started in 1975 as the successor to the International Hydrological Decade (1965-1975), the programme is implemented in phases – with its eighth phase ‘Water Security: Responses to Local, Regional, and Global Challenges’ due to run from 2014 to 2021.

While contributions to the IHP come from across UK hydrology, CEH plays an important role in facilitating input to UNESCO’s activities in this area. Dr Harry Dixon, a senior hydrologist at CEH who manages the UK National Committee for the IHP, said, “Through this work we aim to bring together those organisations in the UK contributing to this key UNESCO programme, with an aim of better coordinating UK efforts around international hydrological and water resources management research.”

The recent election to the Council does not represent the UK’s first involvement in the IHP. UK hydrologists have been influential in the Programme’s development over many years, leading new initiatives, collaborating on research projects and aiding education and capacity development initiatives around the globe. Many IHP activities have a direct impact on advancing water management in developing parts of the world and contribute towards meeting the Millennium Development Goals.

The IHP allows UK scientists and water mangers to engage with a wide range of international networks spanning freshwater science, management and policy. A recent report estimated the value of UNESCO membership to the UK at around £90 million per year, a figure which includes benefits from participation in IHP Programmes and projects which provide research opportunities, help develop international collaborations and enable UK research organisations and Universities to attract overseas funding.

UK National Commission for UNESCO report, Wider Value of UNESCO to the UK 2012-13 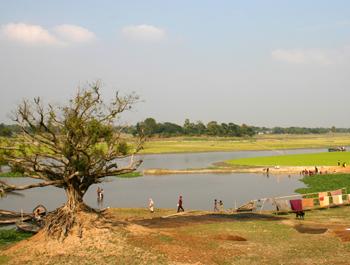