One of the Centre for Ecology & Hydrology’s (CEH) experts on invasion ecology has shared her expertise, working alongside an international team of 45 researchers, on a new paper which highlights that the rise of alien species worldwide shows no sign of slowing down.

Professor Helen Roy, an ecologist from CEH who specialises in invasive alien species such as the Harlequin ladybird, joined an international team of researchers who have demonstrated that globalisation could be fuelling an unprecedented increase in alien species.

The study includes datasets on non-native species from around the world including the GB Non-native Species Information Portal, which is co-funded by the Department for Environment, Food & Rural Affairs and the Natural Environment Research Council, and that has been developed by Professor Roy and her team.

Using the GB Non-native Species Information Portal, and other such databases, a worldwide database of more than 45,000 first records of in excess of 16,000 alien species has been constructed. This enabled the scientists to discover that 37 percent of all recorded invasive alien species were introduced over the last half century (45 years between 1970 and 2014).

At its peak, 585 new species were recorded in a single year. This includes the Harlequin ladybird, which has been a focus of study for Professor Roy since it was first spotted in the UK in October 2004, as well as the Asian Hornet. 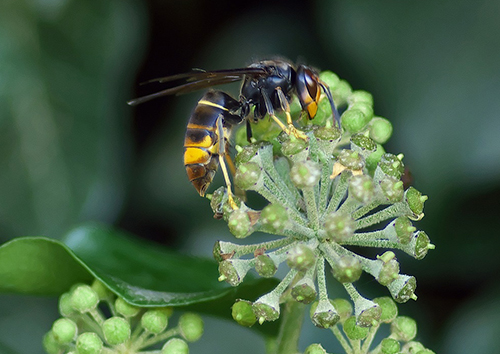 Confirmed sightings of the Asian hornet were made in the UK in 2016.

Professor Helen Roy said, "The rapid escalation in species arriving in new regions of the world has been concerning ecologists for many years. One example is the Harlequin ladybird which is threatening other species within the invaded range. 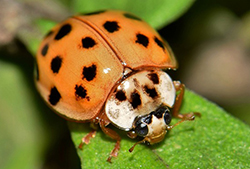 "People from across the UK have themselves become actively involved in helping to report and record species such as the Harlequin ladybird through citizen science initiatives such as the UK Ladybird Survey. This is proving hugely valuable in helping us to understand the ecology of invasive non-native species.

"It is really important that we work together both through global research collaborations, as demonstrated by the international team contributing to this study, but also across society with people taking part in surveillance on the ground for new arrivals such as the Asian hornet."

"It is really important that we work together both through global research collaborations, as demonstrated by the international team contributing to this study, but also across society." Prof Helen Roy, Centre for Ecology & Hydrology

The study, published in Nature Communications, highlights that scientists were well aware that the number of alien species had increased but it was until now unclear whether or not the accumulation of alien species was slowing down.

Lead author Dr Hanno Seebens, from the Senckenberg Biodiversity and Climate Research Centre in Germany, said, "For all groups of organisms on all continents, the number of alien species has increased continuously during the last 200 years.

"For most groups, even the rate of introduction is highest recently. Barring mammals and fishes, there are no signs of a slow-down and we have to expect more new invasions in the near future.

"We also observed a distinct increase in first record rates of vascular plants in the 19th century, probably as a result of the intensification of horticulture. The rates of new introductions of other organisms, such as algae, molluscs or insects, increased steeply after 1950. This is most likely a consequence of the ongoing globalisation of trade."

"Barring mammals and fishes, there are no signs of a slow-down and we have to expect more new invasions in the near future." Dr Hanno Seebens, Senckenberg Biodiversity and Climate Research Centre

The researchers state that while the ‘unprecedented’ increase in alien species can produce a richness of species regionally it does nevertheless have consequences for native ecosystems including the global homogenisations of floras and faunas as well as the global extinction of native biota.

The Senckenberg Biodiversity and Climate Research Centre issued a press release in relation to this story.

See more information on CEH’s work on invasive species, including a video from Professor Roy giving an explanation.

Professor Roy recently presented a seminar to the University of Chile’s Faculty of Veterinary and Animal Sciences on invasion ecology issues. See her presentation here.

The Biological Records Centre, which is supported by CEH and the Joint Nature Conservation Committee, is a national focus in the UK for terrestrial and freshwater species recording. For more information about getting involved in helping to record species, see our Citizen Science resources.