The launch of NASA's Orbiting Carbon Observatory (OCO) satellite has failed after the Taurus XL rocket meant to deliver it into orbit did not jettison its casing at the planned time. The remains of the rocket and the satellite plunged into the ocean just short of Antarctica a few minutes after launch. 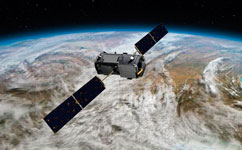 Professor John Burrows, Director of the Biogeochemistry Programme at the Centre for Ecology & Hydrology (CEH) and a co-investigator on the OCO initiative (in his capacity as a member of the University of Bremen, Germany) said, “The UK and European science community is a major partner in OCO and the loss of this instrument is a serious setback. The OCO mission aimed to make unique and high quality measurements of the atmospheric column of carbon dioxide at high spatial resolution. This information is urgently required to constrain our understanding of CO2 fluxes at the Earth's surface (uptake by both the land surface and the oceans) and emissions from fossil fuel combustion.”

Scientists had hoped the satellite would provide new insights into how carbon moves between the atmosphere, land and sea, by measuring carbon dioxide concentrations all over the world from space. The OCO mission would have built on measurements made by the European Sciamachy instrument on ENVISAT and was complementary to the recently launched Japanese mission, GOSAT.

Professor Burrows added, “Detailed understanding of the surface emissions and uptake of CO2 is key to the accurate prediction of global climate change. We urgently need to invest in new European investment satellite based instruments to measure greenhouse gases from space as the first generation of such instruments, which have limited measurement capability, will stop operating by 2013.”

The failure of the OCO mission is also a major loss to the climate modelling community. Dr Chris Huntingford, a climate modeller at CEH said, "The planned measurements from OCO would have helped refine our description of the carbon cycle in climate models, and thus allow more accurate predictions of future global warming. Climate models have improved tremendously over the last decade, and now include a complete description of the global carbon cycle, capturing the effect of human burning of fossil fuels (which raises atmospheric carbon dioxide levels) and how the land and ocean currently buffer this by "drawing-down" carbon dioxide. However, there remains uncertainty in precisely how and where the land surface and oceans currently extract carbon dioxide from the atmosphere, and what magnitude these CO2-sinks will be for future climate change. OCO would have helped reduce this uncertainty.”

Media enquiries for Professor John Burrows and Dr Chris Huntingford should be directed to the Centre for Ecology & Hydrology press office.