Sir David Attenborough was among those attending a special event in Somerset on 16 June to celebrate the 25th anniversary of the reintroduction of the Large Blue butterfly to Britain, an insect that had been pronounced extinct in the country in 1979. Remarkably, Somerset is now the location of the largest concentration of Large Blues anywhere in the world. 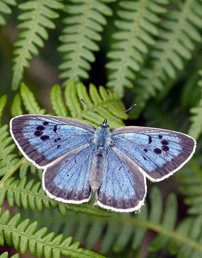 This week also sees the publication of a major peer-reviewed scientific paper on the insect's reintroduction, a pioneering project involving the Centre for Ecology & Hydrology (CEH) and carried out in collaboration with a number of organisations and individuals.

Sir David described the restoration of the Large Blue to Britain as a remarkable success story. It illustrated, he said, the power of ecological research to reverse damaging environmental changes.

The Large Blue remains one of the world’s most threatened species. The British reintroduction was based on major scientific breakthroughs, and the development of a pioneering model for insect conservation which is now being used to restore rare butterfly species across Europe.

Professor Jeremy Thomas, now a Fellow at the Centre for Ecology & Hydrology (CEH), led the reintroduction programme with CEH colleague David Simcox. He said the success of the project was testimony to what large-scale collaboration between scientists, conservationists and volunteers could achieve.

Prof Thomas stated, "Its greatest legacy is that it demonstrates that we can reverse the decline of globally-threatened insect species once we understand the driving factors."

The Large Blue's unusual life-cycle has made its conservation difficult. When the caterpillar is three weeks old it tricks red ants into believing it is one of their own grubs and is taken underground to be placed with the ant brood. The caterpillar spends the next 10 months feeding on the grubs before pupating in the nest the following year and emerging to crawl above ground as a butterfly.

Despite over 50 years of effort to halt its decline, the Large Blue was pronounced extinct in Britain in 1979. Its reintroduction in 1984 was based on the discovery that its caterpillars can only survive in the nest of one particular species of red ant, Myrmica sabuleti. Changes in countryside management were found to be responsible for the extinction. Alterations in grazing coupled with myxomatosis in rabbits left grassland too tall and shady for the heat-loving Myrmica sabuleti. 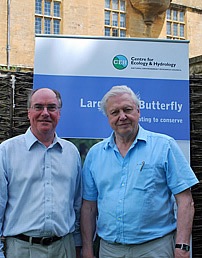 Today, after a major programme implemented by a broad partnership of scientists and conservation bodies, suitable habitat has been restored to more than 50 former sites, and the butterfly can be found on 33 of them in the south-west of England. Other rare species of plants, insects and birds are now benefiting from the same conservation work as the Large Blues because they had suffered from the same changes in agricultural practices.

Those involved include CEH, Natural England, Somerset Wildlife Trust, National Trust, University of Oxford, Butterfly Conservation, J&F Clark Trust and Gloucestershire Wildlife Trust. Network Rail has also contributed to the reintroduction by working with CEH and Natural England to develop some of the largest colonies in northern Europe. As part of Network Rail's engineering works on two sites, CEH designed plans that created optimum habitats for large blues, at a net financial saving for Network Rail.

The success of the project also led to a major, European-funded research programme, MacMan. It used the approach pioneered by the Large Blue project to understand and then conserve four other globally threatened species of Large Blue across Europe.

The project has been widely praised and its importance for other conservation efforts highlighted. Dr Helen Phillips, Chief Executive of Natural England, described the return of the Large Blue butterfly as one of the "great conservation triumphs" of recent years and said it showed what could be achieved when conservationists, scientists and volunteers came together to try to halt and reserve England's declining biodiversity.

Dame Fiona Reynolds, Director-General at the National Trust, described the Large Blue project as a great British success story, adding it was "a result of understanding the science behind the butterfly's complex life-cycle and the need for sensitive and appropriate land management."

The Large Blue butterfly is flourishing at several sites in Somerset, including the National Trust's site at Collard Hill where the public are able to see the butterfly at close hand.

Prof. Jeremy Thomas's work on the Large Blue project is summarised in his article, 'On a Wing and a Prayer' - 16 June 2009

Details of CEH's work on Mimicry of ants by social parasites

A press release was issued to accompany this story

The Guardian - 16 June 2009 - Four decades of hard labour and Battenburg cake: what it takes to bring the large blue butterfly back to Britain

Telegraph.co.uk - 16 June 2009 - Large Blue butterfly flutters back from extinction, thanks to a tiny ant

Mail Online - 16 June 2009 - The blues are back: Butterfly species reborn 30 years after 'extinction'