Scientists at the Centre for Ecology & Hydrology (CEH) have collaborated in new research which shows that birds and butterflies struggle to cope with climate change in intensively farmed and urbanised landscapes.

The research – conducted between CEH, the University of Reading, the British Trust for Ornithology, Butterfly Conservation and Natural England – reveals that some of Britain’s much-loved birds and butterflies could become extinct in some areas where there is not enough natural habitat to allow them to adapt to warming temperatures.

Scientists analysed data obtained between 1964 and 2009 from more than 600 monitoring sites located around England to determine how birds and butterflies reorganised themselves in response to climate change. This included the UK Butterfly Monitoring scheme that is jointly run by CEH, Butterfly Conservation, the British Trust for Ornithology and supported by the Joint Nature Conservation Committee. 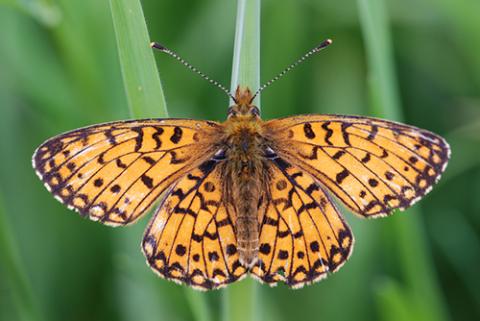 The study demonstrated how butterflies are adapting more successfully with butterfly communities in the north of the country gaining new warm-associated species, such as the speckled wood butterfly. But cold-associated species, such as the small pearl-bordered fritillary, are suffering with numbers falling in areas where natural habitat in farmland, grasslands or uplands has been destroyed.

It was also discovered that cold-associated birds, such as the willow warbler, willow tit and meadow pipit, have already been lost from many species communities and that climate change pressures are the main causes of their demise in local areas.

Dr Tom Oliver, who led the research while working at the Centre for Ecology & Hydrology but is now Associate Professor of Landscape Ecology at the University of Reading, said, “There is a clear signature of climate change on our country’s wildlife, and for many species the situation is worse where the landscape is dominated by arable land and intensively managed grasslands. Bird communities are struggling to successfully adapt to the warming we’ve had over recent decades.

“Although butterflies are coping much better, in both cases a lack of natural habitat in our landscapes is putting cold-associated species between a rock and a hard place by limiting their ability to find resources and survive.”

In summary, the research found that loss of habitat increased the severity of the effects of climate change on bird and butterfly communities in England. It was also concluded that larger declines were caused in birds and butterflies that are used to cold temperatures and prevented increases in birds adapted to warm weather.

The study was funded by Natural England and the Natural Environment Research Council.

The University of Reading issued a press release for this story.