The earth's natural biodiversity is under threat from too much nitrogen, a conference in Edinburgh attended by more than 100 international scientists has concluded. 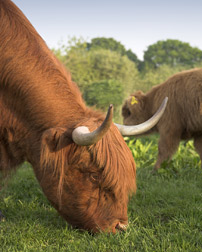 These include ammonia emissions from agricultural fertilisers and livestock, exacerbated by emissions of nitrogen oxides from fossil fuel combustion.

Much of the reactive nitrogen is emitted back into the atmosphere, where it disperses and eventually lands on natural ecosystems. The end result threatens the world's biodiversity, leading to losses of rare species and damaging the services to people which the ecosystems provide.

"Nitrogen's role in the food security and climate change debate has not been given the attention it deserves to date, which needs to change."

The global nitrogen challenge is an issue that has been receiving more and more attention.  This week's conference, hosted by Dr Mark Sutton of the Centre for Ecology & Hydrology (CEH), brought together for the first time experts working under two United Nations conventions: the Convention on Biological Diversity and the Convention on Long-range Transboundary Air Pollution.

The scale of the problem was illustrated by new findings presented to the conference from a team led by Dr Albert Bleeker, from the Energy Research Centre of the Netherlands. The scientists examined the global distribution of protected areas under the Convention on Biological Diversity, as well as global biodiversity hot spots, and compared these with estimated rates of reactive nitrogen fallout from the atmosphere.

Their analysis suggests that 40% of the number of protected areas currently receive nitrogen that is in excess of sustainable limits. Of the global biodiversity hot spots, they identify the Himalayan and south-east China forests as being especially at risk.

Dr Bleeker's team compared the reactive nitrogen values for 2004 and those projected for 2030 and found that the problem will get even worse as nitrogen emissions continue to increase.

Dr Sutton said the conference had been extremely important in bringing the two conventions together.

"It is only by joining forces that we can start to deal with this threat more effectively", he said. "This is the first of many stories that will be coming out about the effects of generating too much reactive nitrogen in the coming months.

"Nitrogen's role in the food security and climate change debate has not been given the attention it deserves to date, which needs to change."

The conventions will be issuing joint recommendations following the meeting and have established a desire to work closely in the future.

Nitrogen's role in climate change will be highlighted at a side event to the COP-15 United Nations Climate Change Conference in Copenhagen in December. The side event has been organised by the International Nitrogen Initiative and the Centre for Ecology & Hydrology.