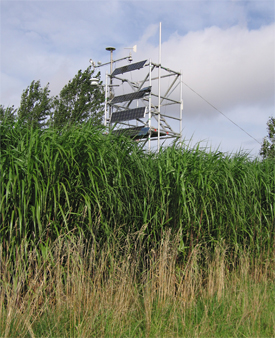 Applying so-called 'biochar' before planting energy crops can cut soil greenhouse-gas emissions by around a third. Soils are among the biggest sources of UK emissions, and this study adds to a growing body of evidence that charcoal could be part of the answer.

“We've shown that adding biochar suppresses CO2 emissions very significantly over several years,” says Sean Case, a PhD student at NERC's Centre for Ecology & Hydrology (CEH) and lead author of the paper. “Previous studies have found this effect in the lab and over short periods, but this is the first time anyone has looked at bioenergy crops in the field, and at the effects of biochar over a long period.”

The main point of growing bioenergy crops like miscanthus or coppiced willow is to generate energy without burning fossil fuels; such energy crops are vital if we're to meet the EU's target of a fifth of energy coming from renewable sources by 2020.

But this study strengthens the idea that there could be other benefits arising from carbon being stabilised and stored by bioenergy soils, and that biochar could add to them. Biochar seems to alter microbial activity in the soil, reducing soil respiration (CO2 emissions) and reducing the conversion of N fertiliser to nitrous oxide that would otherwise go into the air as greenhouse gases. The hope is that it can help the land accumulate and store much more carbon over time than it already does.

“There's a lot of interest at the moment in the potential of bioenergy crops to sequester carbon in the soil, because unlike arable land these crops aren't ploughed every year so the carbon is not being regularly disturbed,” says co-author Dr Jeanette Whitaker of CEH. “Biochar contains a lot of carbon in its own right, so adding it to the soil is already having an immediate sequestration effect, but our research suggests that it also reduces the CO2 emitted by soil respiration, which makes the case for using it even stronger. It's about maximising the sustainability benefits of bioenergy crops.”

The researchers looked at a plantation of miscanthus, a tough, perennial grass whose woody stems can be regularly harvested for fuel. They monitored how much of three greenhouse gases - CO2, nitrous oxide and methane - came from the plot's soil over two years. To check their results weren't being distorted by unusual weather or other conditions in the field, they also monitored soil emissions under controlled conditions in the lab.

The plots that had been treated with charcoal emitted 37 per cent less greenhouse gases than neighbouring plots that hadn't, while in the lab the impact was even bigger at 55 per cent. Most of this came from cutting CO2 emissions, with methane playing no significant role and only a small nitrous oxide component.

Case says this is probably because miscanthus soil doesn't usually produce much nitrous oxide anyway, as it doesn't need a lot of nitrogen fertiliser. It could be a different story on land that receives large amounts of fertiliser, such as that used to grow many food crops, as this increases nitrous oxide emissions. He's now doing research on this topic, and says early results from lab experiments suggest that adding biochar reduces nitrous oxide from arable land by 90 to 95 per cent, or around 40 per cent of overall greenhouse-gas emissions.

At present, bioenergy crops are generally burned for energy, so the charcoal used for the study came from wood harvested elsewhere. But this could change over the next few years. New, more efficient ways of turning biomass into energy exist. These often involve using a process called pyrolysis that heats organic material without burning it, to produce both charcoal and liquid or gas fuel. In the future the fuel could be used in vehicles or to generate power, while the charcoal can be returned to the soil.

“In the long term it's unlikely people will be making biochar out of wood.” says Whitaker. “You can make it out of anything from municipal waste to chicken manure. Ultimately there's a much stronger argument for using an approach based on pyrolysis, as it means you can produce charcoal for carbon sequestration as well as energy.” But she says that more research on these technologies' overall impact is needed before they can be applied on a large scale.

This research is part of a wider body of work at CEH looking at a range of sustainability issues regarding UK bioenergy.