Initial results of a citizen science experiment carried out this year have shown more bumblebees being observed in urban localities compared to suburban and rural settings. The findings challenge the expectation that suburban locations are best because of the diversity of garden flowers.

Approximately 30,000 people, mostly children, took part in EDF Energy's Big Bumblebee Discovery project, resulting in more than 4,000 bumblebee data entries from across the UK. Dr Helen Roy and Dr Michael Pocock from the Centre for Ecology & Hydrology (CEH) led the analysis of the nationwide citizen science experiment, which was carried out in partnership with the British Science Association. 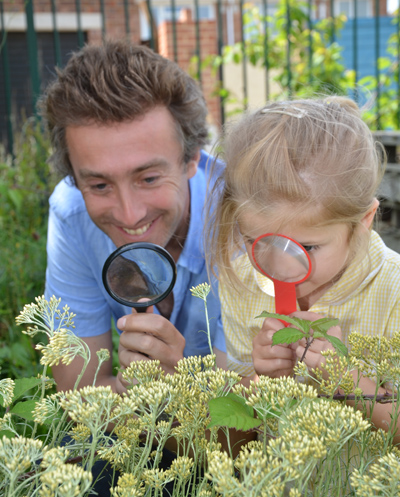 Participants were asked to record bumblebee sightings on lavender plants. Around 27,000 individual bumblebees were reported, and the data was converted to a standard rate, based on counts of five minutes in an average-sized lavender plant.

The results suggest that areas of greater density of flowers were better for bumblebee sightings – a factor which is especially important in landscapes which generally have low densities of flowers, such as urban localities. In otherwise hostile city habitats, flowers such as lavender represent "flower-rich oases" and so can support large numbers of bumblebees.

The rate of observations of bumblebees was also higher when the weather was sunny and windy compared to other conditions. Although insects are heat-loving (thermophilic) they risk overheating at particularly high temperatures (especially large ones such as bumblebees), and can become inactive. Therefore, the findings suggest that the cooling effect of the wind means that bumblebees remain active in summer.

Dr Michael Pocock, CEH, said, “We had some lovely warm days this summer, and the fact that when it was sunny more sightings were reported on breezy days suggests that a breeze has a positive effect on the activity of bumblebees and aided sightings on those days. We were surprised to see more observations in urban localities, as suburban gardens are often thought to be better. Planting lavender (and other flowers) in city areas could help to support populations of pollinators in those habitats.”

The preliminary results, presented at the British Science Festival in Birmingham this week, focus on counts of, rather than diversity of bumblebees, which will be explored later by the researchers. As a result of the initial data analysis, the team at CEH found that there are challenges in identifying bumblebees in accordance with the standard colour group identification method (bumblebees are traditionally categorised into six colour groups by the colour patterns on their thorax and abdomen).

Dr Helen Roy said, “The number of people who have taken part in the Big Bumblebee Discovery is inspiring and their observations are extremely insightful.

"To contribute effectively to the scientific process, people need to be given the best tools and guidance. Our project has revealed that the traditional categorisation of bumblebees by their colour groups may not be as straightforward as previously thought, which is particularly valuable given the importance of pollinating insects and the Government’s consultation on a national strategy for monitoring and protecting them.

Understanding the experiences of citizen scientists is extremely useful for the development of future projects where mass participation can aid the scientific process, and we are keen to explore the issue of bumblebee classification further.”

The experiment is the first year of the Great EDF Energy Experiment, a five year commitment to engaging 100,000 young people into science.

Data from the experiment will continue to be analysed over the coming weeks by the scientists at CEH to help draw conclusions that could answer questions over the impact the changing bumblebee population could have on crop pollination. The full findings of the EDF Energy Big Bumblebee Discovery will be published in due course.

The Big Bumblebee Discovery at The Pod

Building a buzz around the Big Bumblebee Discovery 10 June 2014