High levels of polluting chemicals which are used as flame retardants have been detected in the livers of sparrowhawks in the UK. 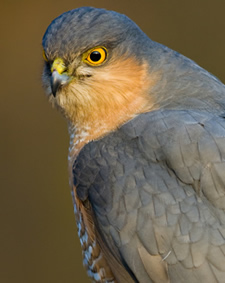 So-called PBDEs (Polybrominated Diphenyl Ethers) are a group of 209 closely related chemicals – some of which are toxic.

They are used as flame retardants in electronics and a wide range of products, including furnishings and cars, but they are released into the air during the lifetime of the product and can also flake off and become airborne as dust. PBDEs can accumulate on the feathers of the birds, which end up eating them when they preen.

Previous studies have shown these pollutants can be detected in sparrowhawk eggs. But this new research has characterised contamination levels in the birds themselves and shows that adult birds have higher levels in their livers compared to juveniles. The higher level in adult birds suggests the toxins accumulate over time.

The work also shows that if the bird was malnourished, then concentrations of PBDEs in the liver can be up to 15 times higher than in the level seen in chicks or well-fed birds.

Professor Richard Shore from the Centre for Ecology & Hydrology, co-author of the study, explained that birds with poor nutrition accumulate dramatically higher levels of these toxins in their liver. This is because PBDEs may be found in fat stores and other tissues which a bird remobilises as it goes through starvation and, in addition, the liver shrinks in size.

"These birds have the same amount of chemicals inside them as non-starved birds, but a smaller amount of tissue to store them in. So, even though the amounts are the same, the concentration is higher," he says. This has emphasised the need to look at an animal's body condition if liver concentrations are used as a way of monitoring persistent organic pollutants, like these.

Scientists don't currently know how high the concentration of these PBDEs needs to be to prove harmful to birds. But even at relatively low concentrations they can disrupt hormones and affect the reproductive success of the species.

Because of this, many PBDEs have already been banned. But levels of these banned toxins don't appear to be lowering in sparrowhawk populations, unlike in other birds.

"What we found happened with gannets was that levels of PBDEs rose sharply in the early 1990s when usage increased but they also fell very sharply when they were banned. We didn't see this with sparrowhawks," says Shore.

Shore stresses that the ban has been effective, but as these compounds are phased out, a range of newer compounds are being introduced in their place. "A main focus on future work is to continue to monitor and analyse new compounds to see if they are entering the food chain, and if they are having any adverse effects," he says.