Despite a warm Bank Holiday Monday for some, August was a decidedly autumnal month for the most part with rainfall generally persistent and showery. In western parts of Northern Ireland intense thunderstorm activity triggered highly disruptive flash flooding and generated new period of record peak flows. While north‑east England and south Wales were notably dry, Scotland, Northern Ireland and south-east England bore the brunt of the rainfall. Despite the wet weather, August was the driest of the last three months, concluding a summer which ranks amongst the top 10 wettest on record for the UK (in a series from 1910).

Soil moisture deficits (SMDs) generally increased in August, though soils mostly remained wetter than average. August river flows were generally above normal in the west of the UK and near or above average in southern and eastern Britain, though flows in some less responsive catchments of southern and central England were notably or exceptionally low for the time of year. Reservoir stocks generally increased in the north and west of the UK and were substantially above average across northern Britain and Northern Ireland. Though some groundwater levels in the Chalk rebounded slightly relative to average, levels remained below normal or notably low across much of south-east England, suggesting that recharge will commence from a below normal baseline.

Summary author Simon Parry, from the Centre for Ecology & Hydrology, said, "Autumn and winter rainfall will have a pivotal role in determining the onset and magnitude of recharge, which in turn will be influential on the water resource outlook for 2018." 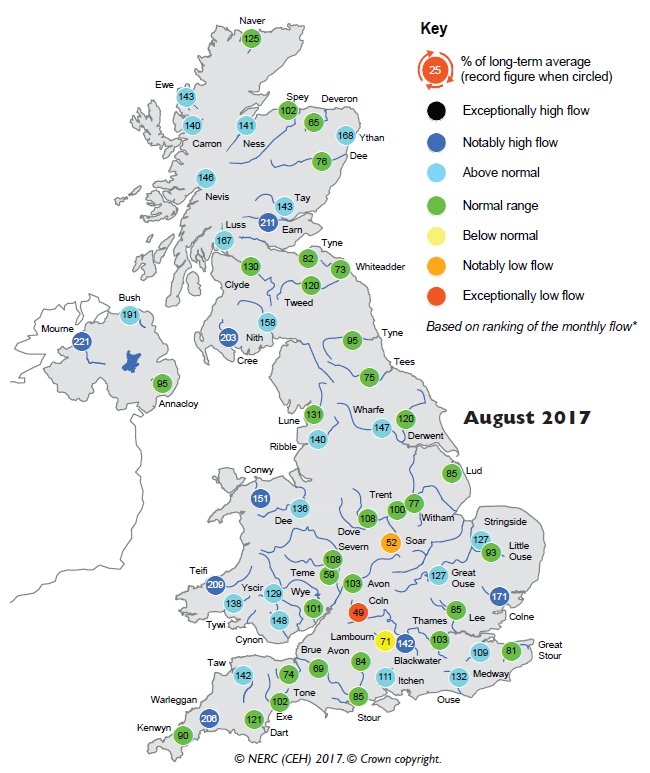 Read the full August 2017 Hydrological Summary for the UK here.

The monthly summary is a look back at hydrological events occurring in August 2017. Latest information on flood warnings is provided by the Environment Agency, Natural Resources Wales and Scottish Environment Protection Agency (flood warnings for Northern Ireland are not available).