Non-native species and mobile applications experts at the Centre for Ecology & Hydrology (CEH) have collaborated with the UK government to develop a new app to record and monitor sightings of the Asian hornet.

The app – launched by Minister for Rural Affairs and Biosecurity Lord Gardiner during Invasive Species Week – includes information on the ecology of the Asian hornet as well as details of species that are commonly confused with it. 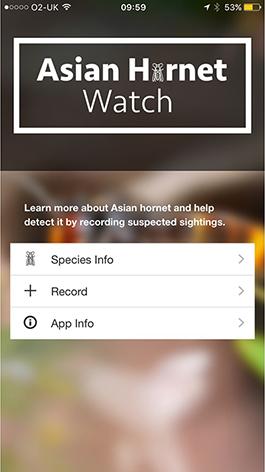 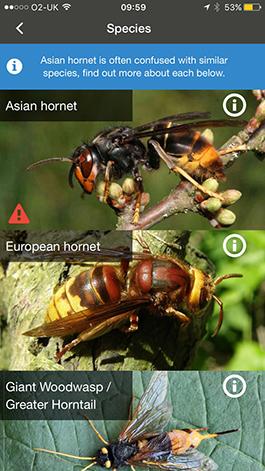 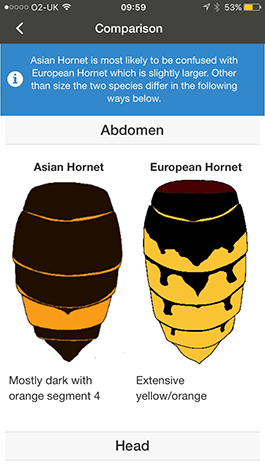 The Asian hornet is a predator of various invertebrates including pollinator insects and is identified as a high-risk non-native species due to its threat to native biodiversity. It arrived in France in 2005 and quickly spread to Spain in 2010. The first Asian hornet recorded in the UK was seen on 19 September 2016 when it was spotted in Tetbury, Gloucestershire.

Professor Helen Roy said, “Early warning of non-native species that have the potential to threaten biodiversity is extremely important. People from across the UK have been playing a vital role in recording non-native species and we hope this new app will make it even easier to submit possible sightings of one particular non-native species - the Asian hornet.”

"Early warning of non-native species that have the potential to threaten biodiversity is extremely important." Professor Helen Roy, Centre for Ecology & Hydrology

Karolis Kazlauskis said, “Our mobile applications enable us to capture biological records with high accuracy and ease. All one has to do is pick the species and the app will automatically assign a precise location using GPS. The app’s speed and simplicity could transform the response to the invasive species.”

The Asian Hornet Watch app is a tool which is available in addition to the GB Non-Native Species Information Portal (GB-NNSIP) developed by the Biological Records Centre at CEH and funded by Defra.

The portal involves a network of people, including volunteer recording schemes and societies alongside CEH and other organisations such as the British Trust for Ornithology (BTO), the Botanical Society of Britain & Ireland (BSBI) and the Marine Biological Association (MBA), sharing information on non-native species.

The Alert System was created at an early stage of the GB-NNSIP in response to a need for rapid information to inform early warning and detection of 41 non-native species – including the Asian hornet. The system is made up of an online recording tool called iRecord and a dedicated website where people can also report sightings.

CEH, through the Alerts System, provides information to Defra’s National Bee Unit and the Non-native Species Secretariat and – together with the Bees, Wasps and Ants Recording Society – managed over 2000 records over the four weeks following the detection of the Asian hornet in 2016.

See inside the app in our short video preview:

Defra published a press release in relation to this story on the GOV.UK website.