Tropical forests are less likely to lose biomass – plants and plant material – in response to greenhouse gas emissions over the 21st century than may previously have been thought, suggests a new study published in Nature Geoscience. 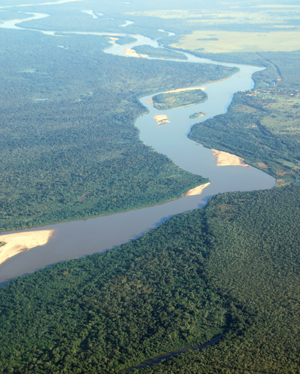 In the most comprehensive assessment yet of the risk of tropical forest dieback due to climate change, the results have important implications for the future evolution of tropical rainforests including the role they play in the global climate system and carbon cycle.

To remain effective, programmes such as the United Nation’s Reducing Emissions from Deforestation and Degradation+ scheme require rainforest stability, in effect locking carbon within the trees.

The research team comprised climate scientists and tropical ecologists from the UK, USA, Australia and Brazil and was led by Dr Chris Huntingford from the Centre for Ecology & Hydrology in the UK.

The team used computer simulations with 22 climate models to explore the response of tropical forests in the Americas, Africa and Asia to greenhouse-gas-induced climate change. They found loss of forest cover in only one model, and only in the Americas. The researchers found the largest source of uncertainty in the projections to be differences in how plant physiological processes are represented, ahead of the choice of emission scenario and differences between various climate projections.

Dr Huntingford said, “The big surprise in our analysis is that uncertainties in ecological models of the rainforest are significantly larger than uncertainties from differences in climate projections. Despite this we conclude that based on current knowledge of expected climate change and ecological response, there is evidence of forest resilience for the Americas (Amazonia and Central America), Africa and Asia.”

But although the work suggests that the risk of climate-induced damage to tropical forests will be relatively small, the paper does list where the considerable uncertainties remain in defining how ecosystems respond to global warming.

Dr David Galbraith, a co-author from the University of Leeds said, "This study highlights why we must improve our understanding of how tropical forests respond to increasing temperature and drought. Different vegetation models currently simulate remarkable variability in forest sensitivity to climate change. And while these new results suggest that tropical forests may be quite resilient to warming, it is important also to remember that other factors not included in this study, such as fire and deforestation, will also affect the carbon stored in tropical forests. Their impacts are also difficult to simulate. It is therefore critical that modelling studies are accompanied by further comprehensive forest observations."

Dr Lina Mercado, of the University of Exeter and CEH, said that, building on the study, "one of the big challenges that remains is to include, in Earth system models, a full representation of thermal acclimation and adaptation of the rainforest to warming.“