Ants at the pupal stage of life, between larva and adulthood, are using sound to communicate with adults in their colony and maintain their rightful place in the colony hierarchy, new research shows. The findings, published today in the journal Current Biology, add to evidence that ants can communicate abstract information through sound in addition to chemicals. 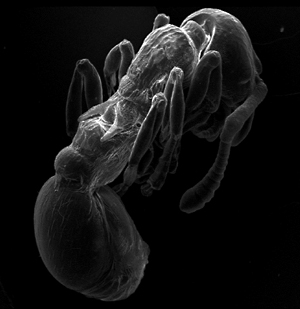 The work is by scientists at the Centre for Ecology & Hydrology (CEH), University of Oxford and University of Turin. Social insects like ants are already known to use chemical pheromones to recognise each other and to organize complex behaviour such as swarming. Researchers also knew that ants make audible sounds. What wasn't clear until recently is that those sounds might actually mean something.

Dr Karsten Schönrogge, an ecologist based at the Centre for Ecology & Hydrology, explained, "One of the truly fascinating characteristics of social insects is their power of self-organization, which allows their societies to achieve amazing feats way beyond the ability of individuals, and communication is key to these achievements."

"Our experiments are the first to show not only that ant pupae use sound to communicate with the adults in their colony, but also that the social ranking of mature pupae depends on their ability to make those sounds."

The research shows that as soon as the ants' bodies begin to harden as pupae, they start making sounds similar to adults with their "file and scraper" organs, although the sounds are first emitted as single pulses, not longer sequences. These sounds are essential for pupae to maintain their rightful place in the ant hierarchy ahead of younger, larval siblings. When unstressed adult worker ants hear the sounds from pupae, they assign them priority over their silent siblings in rescue operations back to the nest. Pupae experimentally rendered mute lost that higher-priority status.

The findings suggest that acoustics might replace chemicals as a mode of communication in this phase of an ant's social life. They also confirm that ants are able to send and receive signals across multiple information channels.

"It seems highly likely that, in some situations, one type of signal might mediate the response to another. The implications of this additional layer of flexibility need to be explored," Dr Schönrogge said.

Cell Press, publishers of Current Biology, issued a press release for this story.