A study published in Nature Geoscience shows that air pollution has had a significant impact on the amount of water flowing through many rivers in the northern hemisphere.

The paper shows how such pollution, known as aerosols, can have an impact on the natural environment and highlights the importance of considering these factors in assessments of future climate change. 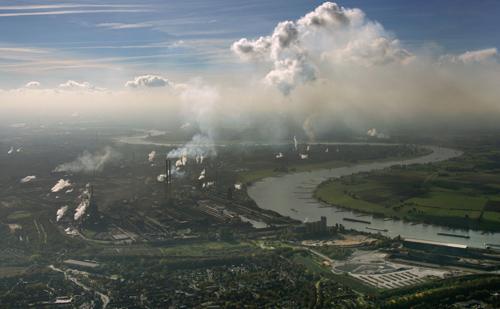 The research resulted from a collaboration between scientists at the Met Office, Centre for Ecology & Hydrology (CEH), University of Reading, Laboratoire de Météorologie Dynamique in France, and the University of Exeter.

It is already established that increased burning of sulphurous coal up to the late 1970s led to additional aerosols in the atmosphere. These are reflective and therefore reduce the amount of sunlight reaching the Earth’s surface, an effect known as ‘solar dimming’.

This dimming then started to reverse in Europe and North America with the introduction of clean air legislation and a widespread switch to cleaner fuels.

In the new study, researchers found that solar dimming increased river flows relative to that expected from surface meteorology, as the reduced amount of sunlight affected the rate of evaporation from the Earth’s surface. When the dimming began to reverse, reductions in river flows were observed.

Nicola Gedney of the Met Office, lead author of the paper, said, “We detect the impact of solar dimming on enhanced river flows over regions in the heavily industrialised northern extra-tropics. We estimate that, in the most polluted central Europe river basin, this effect led to an increase in river flow of up to 25% when the aerosol levels were at their peak, around 1980. With water shortages likely to be one of the biggest impacts of climate change in the future, these findings are important in making projections for the future.”

Chris Huntingford, one of the paper co-authors, is a climate modeller based at the Centre for Ecology & Hydrology. He said, "This study involved using detection and attribution techniques which were able to show a link between aerosols and changes in river flows.

“These studies normally involve looking at how different factors affect temperature, but here we’ve been able to attribute this man-made influence to an environmental impact.”

The Met Office issued a press release for this story.