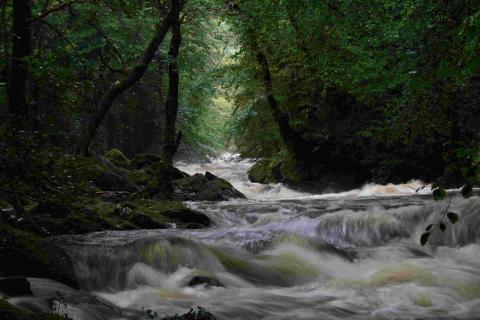 Two new papers by leading environmental scientists highlight the problem in the May 16 issue of the leading journal Science. The researchers discuss how food and energy production are causing reactive nitrogen to accumulate in soil, water, the atmosphere and coastal oceanic waters, contributing to the greenhouse effect, smog, haze, acid rain, loss of biodiversity, coastal "dead zones" and stratospheric ozone depletion.

University of Virginia environmental sciences professor James Galloway, the lead author of one of the Science papers, said: "The public does not yet know much about nitrogen, but in many ways it is as big an issue as carbon, and due to the interactions of nitrogen and carbon, makes the challenge of providing food and energy to the world's peoples without harming the global environment a tremendous challenge."

Co-author Dr Mark Sutton from the UK Centre for Ecology & Hydrology who contributed to the new analysis and leads the EU funded NitroEurope Integrated Project said: “The new papers published this week in Science highlight the need to develop a more integrated approach in responding to the 'global nitrogen challenge’.”

Within Europe the need for an integrated approach to the nitrogen problem has recently been recognized by the Geneva Convention on Long Range Transboundary Air Pollution, which has established a new "Task Force on Reactive Nitrogen" (TFRN).

The aim of the new Task Force is to start investigating more holistic approaches to managing reactive nitrogen, linking the threats to air quality and biodiversity loss with other issues like water quality and greenhouse gas balance.

Dr Sutton, together with Prof. Oene Oenema (Wageningen University Research centre), has been appointed as co-chair of the TRFN, with the first meeting taking place next week (20-23 May) at Wageningen in the Netherlands.

A major contribution to the TFRN will come from the European Centre of the International Nitrogen Initiative, which has established the first 'European Nitrogen Assessment' (ENA). This is a major review activity that will analyse the scientific basis for developing more integrated approaches to managing reactive nitrogen.

Dr Sutton noted: "One of the first tasks will be to look at how well existing nitrogen-related policies fit together.  Current policies have been developed to meet different needs, and it looks like there are challenging inconsistencies.  We must develop a new way of thinking that links the multiple roles of reactive nitrogen in environment and society."

Impacts of nitrogen on the environment

The European Centre of the International Nitrogen Initiative