The quality of our rivers and lakes could be placed under pressure from harmful levels of soluble phosphorus, despite well-intended measures to reduce soil erosion and better manage and conserve farmland for crop production, a new study shows.

The UK-based Centre for Ecology & Hydrology (CEH) led a team of international scientists who found that increased levels of soluble phosphorus in rivers entering Lake Erie, in the USA, may be linked to conservation measures, despite their success in reducing soil erosion and nutrient losses in particulate forms. 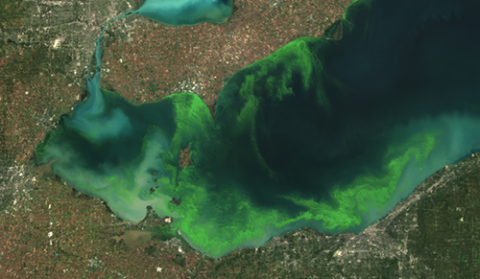 The study shows that since the early 2000s there has been an increased rate of soluble phosphorus inputs from rivers entering the Western Lake Erie Basin – which has been linked to the increasing extent and severity of harmful algal blooms.

Phosphorus is an essential nutrient for crop production and for terrestrial and freshwater ecosystems. But elevated levels of soluble phosphorus can cause proliferation of algae that produce toxins which can be harmful to fish, other animals and plant life in lakes, rivers and streams. The harmful algae can also impair water that is treated for human consumption.

Lead author Professor Helen Jarvie, a Principal Scientist in Water Quality at the Centre for Ecology & Hydrology, said, “We accounted for changing weather and rainfall patterns, and found increases in river flows alone contributed about one third of the marked increase in soluble phosphorus entering Lake Erie since 2002, despite reductions in fertilizer use and amounts of phosphorus stored in soil. The remaining two thirds must arise from other changes within the watershed.”

“We noted that, over time, conservation tillage - where fields are not ploughed, and crop residues remain on the fields before and after planting the next crop, to reduce soil erosion and runoff – has continued an increased trend of adoption since the mid-1980s. It is plausible that the transition from conventional to conservation tillage, along with less incorporation into the soil of broadcast phosphorus fertilizer applications, may have inadvertently caused accumulation of highly-soluble phosphorus at the soil surface. 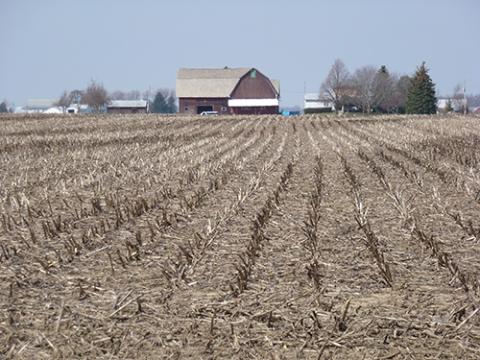 “This can increase losses of soluble phosphorus during rainfall-induced runoff events, and may also have been compounded by installation of subsurface drainage, which can rapidly transmit the soluble phosphorus from fields to rivers.”

"It is plausible that the transition from conventional to conservation tillage, along with less incorporation into the soil of broadcast phosphorus fertilizer applications, may have inadvertently caused accumulation of highly-soluble phosphorus at the soil surface." Prof Helen Jarvie, Centre for Ecology & Hydrology

Prof Jarvie added, “These research findings have important implications far beyond the Lake Erie Basin, because conservation tillage is widely recommended as a beneficial management practice for reducing erosion and nutrient losses from cropland in the UK and across Europe and North America.”

During the 1980s and 1990s, there were major water-quality improvements in Lake Erie, as a result of the Clean Water Act regulating sewage effluent inputs, improved fertilizer management, and conservation measures, which reduced soil erosion and losses of particulate phosphorus attached to soil particles.

However, in the last 15 years, there has been a decline in water quality, with increases in algal blooms in the Western Basin, linked to the rise in the more ecologically-damaging soluble form of phosphorus. In 2014, a toxic algal bloom in the Western Lake Erie Basin led to a “do not drink” advisory for more than 400,000 people in the city of Toledo, Ohio.

Consequently in 2016, the US and Canadian governments set a new target of reducing levels of phosphorus entering Lake Erie by 40 percent.

Co-author Professor Andrew Sharpley, Professor of Soils and Water Quality at the University of Arkansas, said, “The main lesson learnt is that there can be unintended consequences of changing farm conservation practices, which should be recognized.

“Effective conservation is an adaptive process. In the case of Lake Erie catchments, reduced land tillage dramatically reduced erosion, but without changing fertilizer management practices, this effectively trapped phosphorus at the soil surface.

“There was an eventual transition from soil being a sink for phosphorus to become a source to drainage waters. The implications of this research resonate beyond the Lake Erie Basin and are important to transferring science to the long term benefits of conservation management.”

The findings were based on Heidelberg University’s 40-year record of daily river-water chemistry for the major rivers draining into the Western Lake Erie basin, and demonstrate the global need for long-term water-quality monitoring to detect change so we can adaptively manage our water resources to ensure their long-term quality and security. 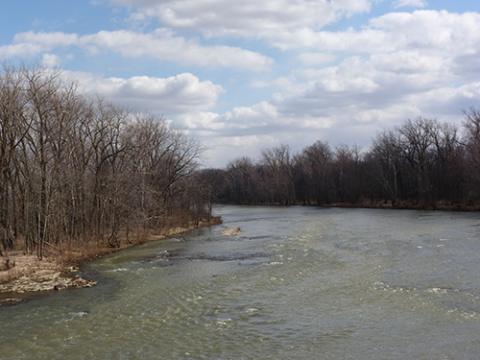 The Sandusky river, which flows into Lake Erie

The report published in the Journal of Environmental Quality calls for soil and water quality management approaches which tackle both soluble and particulate phosphorus losses from farmland, and highlights that additional conservation measures will be needed to address the soluble phosphorus component.

The research was funded by the Natural Environment Research Council and was conducted in partnership with the University of Arkansas, Heidelberg University in Tiffin, Ohio, the US Department of Agriculture, and the International Plant Nutrition Institute.

CEH issued a press release for this story. For further information, contact the CEH Press Office.