Katie Muchan, a hydrologist with the Centre for Ecology & Hydrology, looks at the 2013/14 winter rainfall totals recorded at CEH's meteorological station at Wallingford, Oxfordshire. 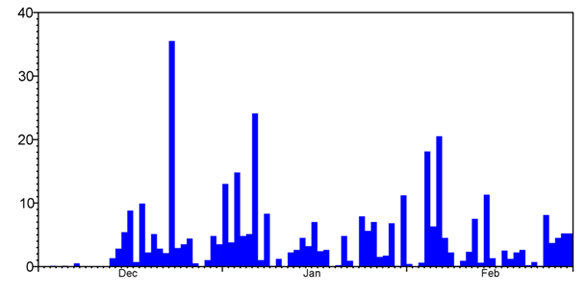 The news for the last three months has been dominated by record rainfall and prolonged flooding. It was the wettest winter for England & Wales since records began in 1766; and in south-east England, 2013/2014 winter rainfall in both the Thames and Southern regions was more than 230% of the average. The story for the meteorological station based at CEH’s Wallingford site has been no different, with several rainfall records broken during the winter of 2013/2014.

Daily temperature, rainfall and sunshine have been recorded at the meteorological station at the Wallingford site since 1962, in addition to observations of cloud cover, present weather and visibility. The persistence of the storms through the winter of 2013/2014 can be seen in the daily rainfall data. Once the storms started on 15 December 2013, rainfall was recorded on 73 of the 76 remaining days of winter. Furthermore, 66 of these 76 days can be classed as a rain-day, defined as a day when at least 0.2mm rainfall is recorded.

December started dry, with only 2mm of rainfall recorded in the first two weeks. However, following the first storm on the 15th, rainfall was recorded on all but one day for the rest of the month and the most notable storm, on the 23rd, recorded a daily rainfall total of 35.5mm (36% of the monthly total). This made it the wettest day of the year, and also the wettest day since 22 August 2010. Due to the dry start to the month, December 2013 rainfall was not record-breaking, but it was the fifth wettest in the station’s history, with a monthly total of 97.9mm. 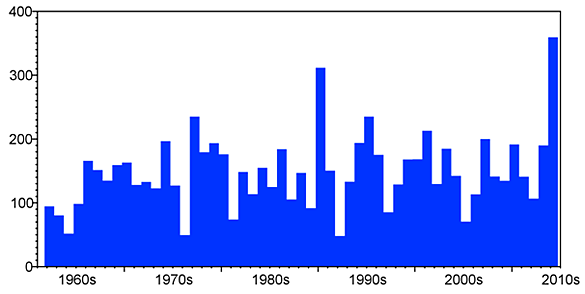 The persistent rain continued into January; only two days recorded no rainfall. As a result, January was the wettest of the winter months; the monthly total of 148.4mm broke the previous January record by 30mm (~25%). January 2014 was also the third wettest of any month at the station in the record from 1962, behind August 1977 and October 1966.

February is normally the driest month of the year with an average monthly total of 37.5mm. However, with rain falling every day in February 2014, yet another record was broken. The monthly total of 112.9mm is 302% (i.e. three times) the average, making it the wettest February in the station’s history (beating the previous record of 103.3mm in 1990).

While the individual monthly totals and records are impressive in themselves, the accumulation of rainfall across the winter season also produces some record-breaking figures. The rainfall total of 246.3mm in December 2013 and January 2014 set a record for the wettest two-month accumulation of any in the station's history, only to be broken by the rainfall in January and February 2014, which totalled 261.3mm. On 13 February, with 15 days of winter remaining, the record for the wettest winter set in 1989/1990 (311.5mm) had already been broken. Rain continued throughout the rest of the month, giving a 2013/2014 winter total of 359.2mm, breaking the previous record by 47.7mm.

A joint Met Office and CEH report on the winter storms and floods was published in February.