Earlier this week our new paper linking wild bee declines with neonicotinoid pesticides was published. This is a controversial topic so the media attention has been pretty intense: so far we’ve done numerous interviews for TV, radio and written journalism, all helped by a briefing session at the excellent Science Media Centre in London. For me, it’s been an epic journey to get to this stage involving numerous rounds of peer review and re-analysis over three long years.

The idea that pesticides harm wildlife is not new. Foliar sprays are a major source of pollution in waterways, so applying the pesticide as a seed-dressing was hailed as a revolutionary alternative. The problem is that the pesticide is expressed throughout the plant tissue, including pollen and nectar. Over recent years there has been a growing body of evidence that seed-coated neonicotinoids are harmful to beneficial insects, including bees. However, most of these studies are based on short-term experiments on honeybees.

Our study is different because we looked at long-term trends for 62 wild bee species across all of England. We specifically focus on the use of neonics as a seed dressing on oilseed rape, which is by far the most widespread and valuable insect-pollinated crop in Europe. We measured the correlation between bee population persistence and the neonic dose in 5 x 5 km grid cells. Our key result is that bee population persistence declines with increasing neonic dose, and the correlation is three times more negative for species known to forage on oilseed rape than those that do not. However, the effect is negative for both groups, supporting the notion that multiple routes of exposure to neonics exist (eg. as dust from seed-drilling). Overall, the results fill a major gap in the evidence about the impacts of neonics, which we hope will be useful in the forthcoming review of the EU moratorium.

This kind of research really highlights the value of long-term monitoring of wildlife. We don’t have a systematic monitoring scheme for pollinators, although a blueprint was recently published. Instead we have the fabulous dataset collated by the Bees, Wasps and Ants Recording Society (BWARS), which contains the observations of hundreds of dedicated expert amateur naturalists. We used 86,184 BWARS records from 4,056 square kilometres, but these records aren’t systematic, which presents substantial challenges for analysis. I’ve previously published a paper exploring the biases in these data and showed that hierarchical Bayesian occupancy-detection models are appropriate for analyses of this sort. These models now underpin a large body of trend assessment work within the Biological Records Centre, including our contribution to the UK Biodiversity Indicators (see here and here). 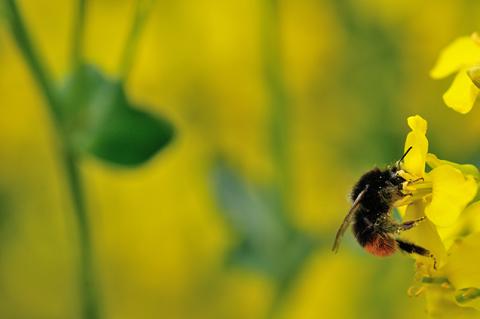 As well as being the most high-profile, this study is also the most sophisticated statistical analysis I’ve ever undertaken. In addition to the biases mentioned above, this analysis was further complicated because I used a model that is both ‘dynamic’ and ‘multispecies’. Dynamic means that I explicitly modelled the biological processes of persistence and colonization among grid cells. The model is multispecies because all 62 species were included in the same model: this allows information to be shared across species and results in far greater precision of the parameter estimates (than separate models for each species). All this means that our model takes account of multiple forms of uncertainty in the data, which makes the results really robust, but rather hard to interpret. In particular, our headline results are based on correlations between annual persistence and our measure of neonic dose.

Persistence itself is a difficult concept for a lay audience, but the fact that these correlations are measured on the log-odds scale makes the actual numbers meaningless. To fill this communication gap, I sought to express the results in terms of percentage declines over the period that neonics have been used. The model estimates occupancy (the proportion of occupied sites) of each species in each year, so the headline decline of 13% (the average across all 62 species) was relatively straightforward to extract. But I really wanted to be able to say how much of this was due to the neonics. To do this, I had to construct a new analysis on top of the existing model. The new analysis essentially simulates what would have happened if neonicotinoids were completely benign. In modelling terms, this is a standard extrapolation of the model in which one parameter (the “neonic effect”) was fixed at zero.

Simulating the fate of 100,000 “populations” (62 species in 1658 grid cells) over a decade is far from straightforward, not least because there is considerable uncertainty in all the parameters and in the starting conditions (ie. the status of each population before the first neonics were applied). So I ran 4,000 simulations in order that the results would be faithful to the way uncertainty is handled in the model itself. The amount of data produced gave me a massive technical headache and required some creative computing solutions to handle efficiently. 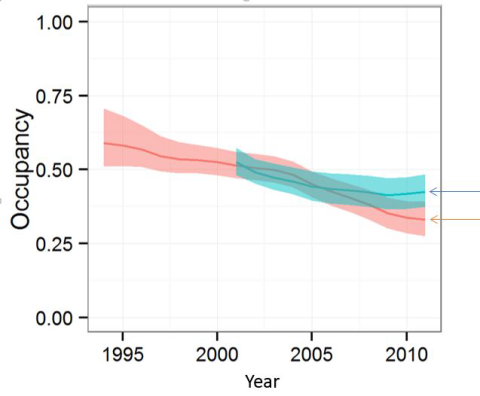 Figure: observed (red) and simulated (blue) trajectory of the hawthorn mining bee, Andrena chrysosceles. The solid line is the best estimate and the ribbons delimit 95% credible intervals. The simulated trajectory is an estimate of what would have happened if neonicotinoids were completely benign. For this species, the observed occupancy in 2011 (red arrow) is 18% lower than the best estimate from the simulation.

The numbers reported in the media are almost exclusively based on this exercise. For example, it was widely reported that neonics caused declines of up to 30%, and a 10% decline among exposed species. The former is the biggest value of the neonic attributable decline (the Sharp-collared furrow bee, Lasioglossum malachurum) and the latter is the mean neonic attributable decline across 34 species that forage on oilseed rape. Another ‘fact’ that was reported is that around half the total bee declines are attributable to neonics. This derives from the mean neonic attributable decline across all 62 species, which at 7% is conveniently close to half of the 13% mentioned previously. The numerate reader may have noticed these figures are not directly comparable, but it’s good enough if qualified with ‘approximately’.

Having provided the media with simple percentage decline statistics, I then had to come up with a way of explaining what had actually declined. In the paper we use the phrase ‘extinction’, since the extinction rate is simply 1 minus the persistence rate. So, taking the 10% figure above, it would be not unreasonable to infer that 10% of local populations went extinct. But ‘extinction’ is problematic for at least two reasons. One is that “local extinctions” don’t really mean anything to a lay audience, and it could be easily misinterpreted as “10% of species went extinct”. The other is that we didn’t actually observe any populations going extinct because this 10% figure is actually a probabilistic statement about a change in the number of occupied grid cells (ie. populations). So we could have have told reporters that the 10% figure represents a decline in the number of populations, but this could be easily misinterpreted as a decline in population numbers (ie. the total number of bees). Our model has absolutely nothing to say about abundance, so this phrase was also ruled out. In the end, we recommended vague phrases such as “decline in distribution” and “became less widespread”.

Seeing the woods for the trees

There are several reasons to treat these numbers with caution. For one thing, extrapolating from a statistical model makes a set of assumptions around ‘all other factors being held constant’, which are unlikely to be true in the real world. More importantly, there is enormous uncertainty in all the numbers in the previous paragraph, but there is no room for this kind of nuance in the mass media. Reflecting on this, I think the old phrase about “seeing the woods for the trees” is a useful analogy here. The analyses in the paper describe the general patterns about the impacts of neonics (ie. the woods) in the most robust and sophisticated way possible. Non-scientists, including the media, NGOs and policy makers, want specific headline facts, which leads to a tendency to focus on details about individual species (ie. the trees in the analogy above). So these specific numbers should be treated with caution (none were mentioned in the paper), but I am reconciled to the fact that reporting statistics to a mass audience requires making compromises.

In the end, I’m really pleased with the paper we produced, and with the strength of inference we were able to draw (given the nature of the data). I’ve also been impressed at the degree to which journalists have sought to get their facts straight, and how (in general) they have reported this controversial topic with minimal hyperbole and without oversimplifying the complexities of this ongoing debate.

Dr Nick Isaac is a macroecologist who uses statistics to study how biodiversity is distributed in space, how it is changing over time, and how we measure it.

The full paper is open access: Impacts of neonicotinoid use on long-term population changes in wild bees in England. Nature Communications. DOI: 10.1038/NCOMMS12459

The impacts of neonicotinoids on honeybees