We're going on a Bug Hunt!

Two of our PhD students, Scott McKenzie and Helen Hicks, were out and about at Brownsover Community School near Rugby this week, where they organised and led a hugely successful Bug Day. Read Scott's account of the day below: 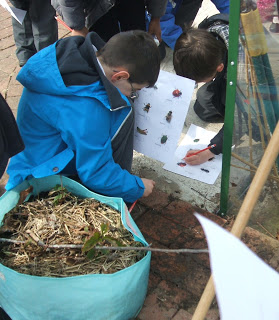 "Why do ladybirds have spots?"

I was stumped. It was all going so well! In the past, I'd fended away probing questions from top academics at international conferences regarding my own PhD. Previously that morning, I had explained why some caterpillars were brightly coloured but others just looked like sticks, but this one had me scuppered. I came up with a few possibilities, avoiding going into too much detail about Natural Selection. The seven-year-old ecological prodigy seemed satisfied with my response and we moved on. Phew!

I was at Brownsover Community School and in front of me were 60 cross-legged six and seven-year-olds eager for information on the favourite bugs and beasties. Some months previously I had been asked to organise a “Bug Day” at the school near Rugby. With the recent cold weather I realised that undertaking such a venture could be quite a challenge, as not much insect life will be out-and-about. Regardless, I jumped in with both feet. I have worked with children before and it is incredibly rewarding to think (if slightly naively) that you are inspiring the next generation of ecologists – the perfect pick-me-up to the recent miserable weather! I set about organising an action-packed and fun-filled day for the children. 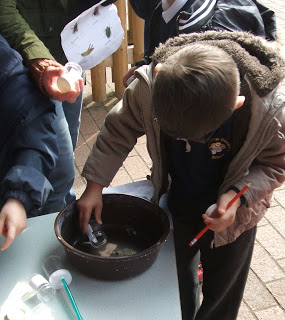 The morning session consisted of an interactive presentation that illustrated the diversity of insects all over the world, ranging from stag beetles to pond skaters and katydids to termites. The ID skills of many of the children were impressive to say the least, with one child correctly identifying a water scorpion! The same child informed the rest of the class that a woodlouse was not an insect and was more closely related to a lobster. Pupils and teachers alike looked at me expecting to say how wrong he was, but I nodded in agreement, impressed.

A drawing task followed the barrage of questions the presentation had evoked. Using what they had just learnt about the diversity of insects, I asked them to draw their “Ultimate Bug”. I wanted them to tell me where it lived, what it ate and what special features they had. They could draw on all the attributes we had just been discussing; some had huge eyes on stalks and were covered in spines, others lived in water and ate fish (but still had huge wings!). One even had no eyes because it just lived in tunnels eating worms. Needless to say their imagination ran riot and they came up with some interesting and spectacular specimens. 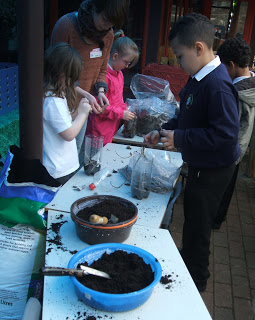 The next task was a classic “bug hunt”. With pooter and ID sheets in hand they set about stone-turning and leaf-litter-rummaging around the school grounds in search of some of the minibeasts they had seen during the morning. To encourage concentrated searching we had hidden a number of plastic bugs around the school in places where invertebrates might be concealed. If a pupil found one, they were rewarded with a wiggly worm (sweet). After 45 minutes we had amassed an impressive array of bugs and beasties, including 7-spot ladybirds and some impressive looking centipedes. By this time tummies were rumbling and lunch was upon us.

Here's one I made earlier...

The afternoon task was to make themselves a self-contained decomposer community from a 2-litre plastic bottle. In true Blue Peter style, I had taken in “one I had made earlier” (it is now adorning my desk in the CEH student room). The top of the bottle was cut off and filled with a handful of soil and some dead leaves and sticks. The children then added their own detritivorous invertebrates including woodlice and millipedes. I’ve always thought it is easy to enthuse kids about certain minibeasts: colourful butterflies and pretty ladybirds, for example. I think it’s much more difficult to get them excited about drab, dull things.  I had my work cut out, but I think I managed to win them over! Sooner or later they were handling woodlice as excitedly as if they were exotics in a zoo! 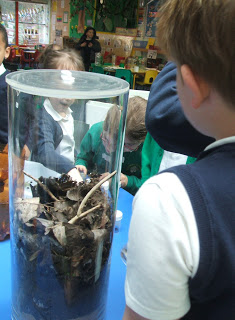 Whilst some held woodlice, others were peering into water-filled trays containing various aquatic invertebrates we had collected the previous day. There were lots of “wriggly things” and also many things “that looked like some stones”, all of which were received well by the children. Also on this “hands-on” table were some stick insects I had acquired the week previous. Once one child had an insect clambering over their hand they encouraged other, more timid, children to do the same. After a short while the stick insects had made their way over the hands of most of the children (and some braver teachers) in the class. It was great seeing children impart their knowledge onto their peers. This was mainly in the form of “you have to be gentle with them as their legs might come off”. Thankfully, no stick insects succumbed to this fate and all the children were, indeed, gentle.

It was fast approaching the end of the school day and all that was left was to suggest a few things they could do around their own gardens and the school to help insects. This included planting wild flowers and butterfly-friendly plants and building somewhere nice and warm for bugs to overwinter. I had been genuinely impressed with the high levels of enthusiasm and attentiveness shown by all the pupils throughout the day and I rewarded the top entomologist with their own mini-microscope.

It was an incredibly rewarding and satisfying day for all, if quite tiring! I really do think it emphasises the importance of speaking to children about ecology in a fun and informative way. It was an equally educational day for us and I have learnt much from the experience. I'm looking forward to similar opportunities in the future! 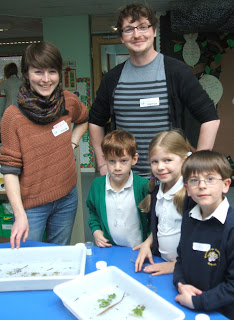