We need to talk about Nitrogen

Plantlife, together with the Centre for Ecology & Hydrology and other organisations (RSPB, Stockholm Environment Institute, Woodland Trust, and British Lichen Society) have been talking about nitrogen. In a recent report and workshop we have highlighted the need to raise the profile of the nitrogen problem.

Nitrogen (N) in the form of reactive nitrogen (Nr) had until the last century been a limited natural source to plants provided mainly by biological fixation. Nitrogen is a major growth nutrient - all plants need N in order to grow. It is a major constituent of structural tissue, facilitating conversion of CO2 to carbohydrate. However, this limited availability of N has made many plants and habitats very efficient and effective at surviving at low nutrient levels.

With the necessity to sustain a growing population improvements in crop yields have paved the way to increase production of synthetic fertiliser using the Haber-Bosch process – the process of producing ammonia from hydrogen and nitrogen in air (N2) under high temperature and pressure. This additional availability of reactive N has increased agricultural intensification, increased livestock production and boosted crop yields. Furthermore, the increased use of fossil fuels has intensified the expansion in the use of N around the globe. However, with the excessive use of nitrogen has come the unintended losses and leakages in the system leading to environmental issues like eutrophication of soils and freshwaters, acidification, poor air quality, and greenhouse gas emissions.

Nitrogen is emitted into the atmosphere in a number of ways – as nitrogen dioxide (NOx) from power station stacks, and other fossil-fuel combustion processes including transport, and as ammonia (NH3) predominantly from agricultural sources like livestock manure and fertiliser application to crops. 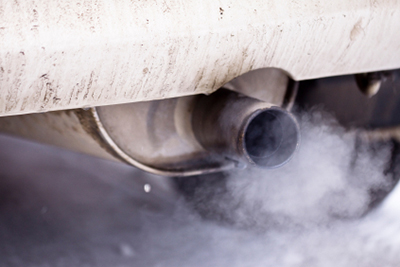 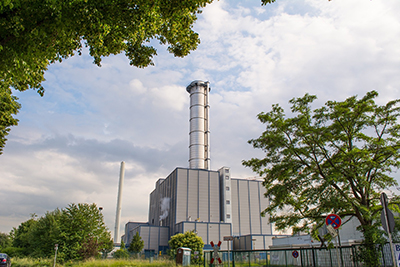 Production areas of ammonia (NH3) emissions with % contribution to UK 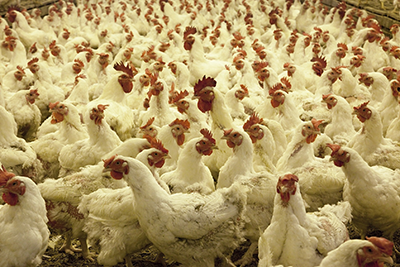 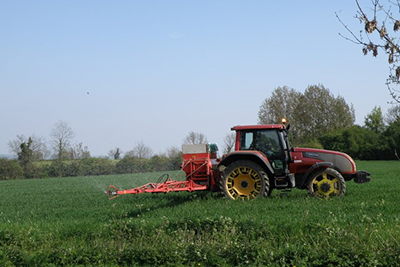 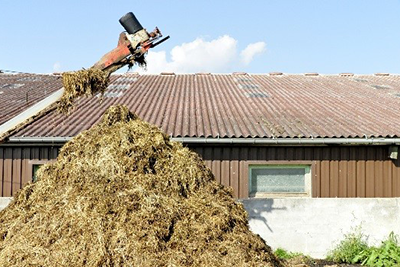 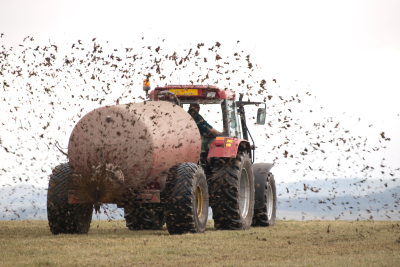 A number of studies have shown that nitrogen deposition is an important driver of plant community change (Field et al., 2014; Stevens et al., 2010). As more nitrogen is added from the atmosphere to semi-natural habitats the diversity of sensitive lichens, mosses and forbs declines, while the percentage of the cover of grasses increases. 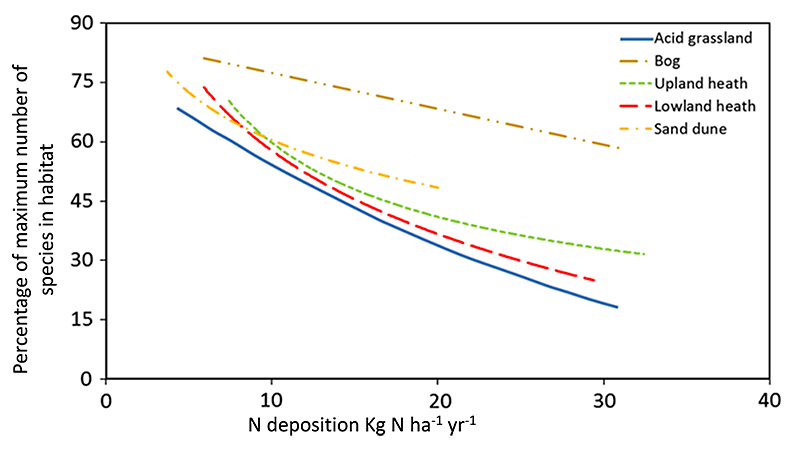 Figure: Relationship between N deposition and the percentage of maximum number of species in each habitat (Field et al., 2014)

Lichens obtain almost all their nutrients from the atmosphere. They have no means of controlling nutrient uptake, unlike vascular plants, with free exchange of both gases and solutions. This makes them very sensitive to increases in N and as a consequence lichens are equivalent to an early warning ‘canary’ for sensitive plants. Similarly mosses are among the most sensitive components of the vegetation with respect to air pollutant deposition, and can be sensitive to both acidity and N. In 2014, the nitrogen critical load was exceeded for 62% of the area of sensitive habitats in the UK (excluding Scotland, the area is more than 90%). For calcareous grassland and many types of woodland, the area exceeded in the UK was 86% - 100%. Critical loads for nitrogen can be seen as an environmental limit set for habitats where below a certain exposure to a pollutant harmful effect do not occur– for example the critical load for a raised bog is between 5-10 kg N/hectare/year.

Levels of atmospheric reactive nitrogen have tripled in Europe in the last century. Since 1990, there have been substantial declines in NOx emissions, with continuing projected declines, but ammonia emissions have seen little decrease and predicted to remain stable. Furthermore, ammonia emissions from agricultural sources are the dominant source of nitrogen deposition across the Natura 2000 network. This means that future options for reducing critical load exceedance need to focus on reducing ammonia emissions. 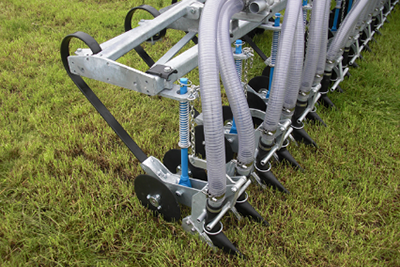 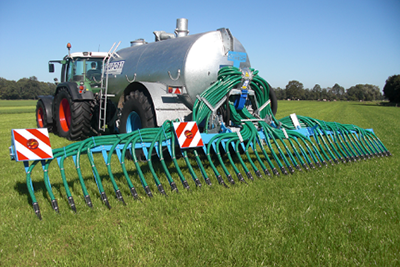 Above left: Discs are used to cut vertical slots in the soil up to 50mm deep into which slurry is placed. Photo: bomech.nl
Above right: Trailing shoe slurry spreader enables plants to absorb nutrients from slurry faster and reduces leaf contamination. Photo: bomech.nl 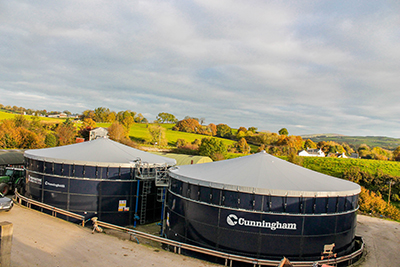 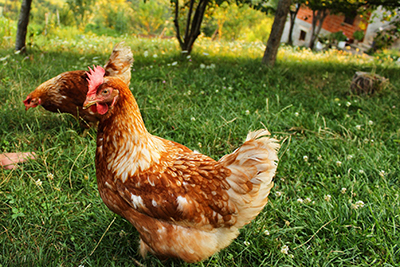 Above left: Tight lid cover is the best proven and most practicable method to reduce emissions from slurry stored in tanks or silos. They can be retro-fitted. Photo: cunninghamcovers.co.uk
Above right: Hens ranging under trees. Tree planting can be used to capture ammonia and provide suitable shelter and ranging areas.

Importantly, options for reducing ammonia at the housing, storage and spreading stages are interdependent, and combinations of measures are not simply additive in terms of their combined emission reduction. For example, controlling emissions from spreading is very important as it is the last stage of manure/slurry handling, and much of the benefit of abating during housing and storage may be lost. Likewise, controlling emissions from land application will have less benefit if large losses occur at the housing and storage stages.

Finally, ammonia emissions not only have negative effects on the environment but also represent an inefficient use of manure-N as a fertilizer. Therefore there is a potential for farmers to save money by reducing ammonia emissions.

See more about the Plantlife Event

Bill Bealey is an environmental scientist at CEH Edinburgh and was a keynote speaker at the ‘We need to talk about Nitrogen’ workshop hosted by Plantlife and the BES Plants, Soils and Ecosystems Group in London on 19 January 2017.