A huge number of scientific papers have delved into the extraordinary data held by the National River Flow Archive and National Groundwater Level Archive. As our blog series on hydrometric data continues, Simon Parry of CEH (right) discusses one of the most recent papers to use the data, newly published in the Weather journal, which analyses the dramatic transformation from drought to flood in the UK during the summer of 2012. 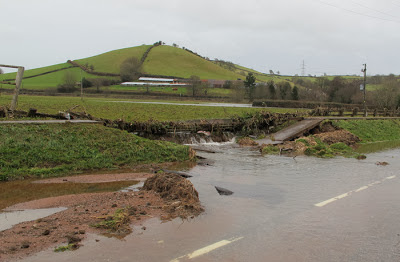 Whilst this year's fine and dry summer was very much welcome, it was not typical of the more unsettled summers of the last few years. Although the Olympic and Paralympic Games in 2012 were spared the worst of the weather, from April 2012 onwards a succession of wet fronts drenched the UK, in particular England & Wales, resulting in the wettest year for more than a century.

This episode emphatically put to an end concerns about the water resources situation, which saw hosepipe bans implemented in April across south, central and eastern England affecting 20 million consumers. Recent research by CEH scientists, in collaboration with the UK Met Office, published last month in Weather, finds that the transformation from drought to floods in England & Wales is without modern parallel in the historical record (Parry et al. 2013).

The extreme drought of 1975-76 remains the most severe in the historical record, most likely the worst experienced in the UK for at least the last 250 years (Rodda & Marsh 2011). This episode was terminated dramatically in September and October 1976, over which time England & Wales received almost double the long-term average rainfall.

The 2010-12 drought did not reach the same intensity as 1975-76 (Kendon et al. 2013); the summers were not hot or particularly dry in 2010-12, in contrast with heatwave-dominated droughts in 1976 and 2003. However, the rainfall shortages were concentrated in the winter half-years (October-March), a vital time for the recovery of water resources and, as such, outflows from England & Wales in March 2012 were lower than the corresponding point in 1976. Hosepipe bans were implemented in several areas at the end of the normal groundwater recharge season (April); there was little prospect of improvement in the water resources situation, barring something extraordinary happening...

Something extraordinary did happen. Whilst the transformation in 2012 may not have been as spectacular in rainfall terms as that of 1976, England & Wales recorded new record rainfall (series from 1766; Alexander & Jones 2001) for April, June and the summer half-year (April-September), and April-December 2012 was the wettest of any nine-month period in ~250 years.

The most important impact of the succession of rain-bearing frontal systems was to re-wet soils which allowed the replenishment of groundwater to resume. What made the transformation in 2012 particularly unprecedented was the resumption of groundwater recharge through the summer half-year; the patterns of hydrological response tracked in the opposite direction to normal seasonal conditions.

Perhaps owing to the British preoccupation with the weather, much attention is given to rainfall figures in characterising the water situation in this country. However, water resources are more complex than this; the relationship between rainfall and runoff is not one-to-one, owing to catchment characteristics and antecedent conditions.

The distinction between a transformation in rainfall and the unprecedented hydrological transformation is an important one; the former would not necessarily have terminated hydrological drought conditions, but the latter did so emphatically. If there had been no concurrent response in groundwater levels following the rainfall, it is likely that hosepipe bans would have remained in place even through a moderately wet summer. This would have been a difficult message for the water companies to communicate to the public, so perhaps the industry was happy on more than one level to have witnessed a hydrological transformation without modern parallel.

Simon Parry is a hydrologist based at the Centre for Ecology & Hydrology's Wallingford site.

A comprehensive report by Terry Marsh, Simon Parry and Jamie Hannaford, in collaboration with Mike Kendon (Met Office), on the 2010-12 drought and subsequent hydrological transformation will be published later this month and will be available to download freely from the CEH website.

Next in our hydrometric data blog series, Looking forward - where the archives are going next... Watch this space!