Professor Nick Beresford, a radioecologist at the Centre for Ecology & Hydrology, is currently leading an international team of scientists to understand the ecological impact of a recent major forest fire near the Chernobyl nuclear power plant. He explains more:

The National Environment Research Council (NERC) has awarded an urgency grant for the Centre for Ecology & Hydrology (CEH) to lead a team studying the effects of a major fire which affected an area known as the ‘Red Forest’ near Chernobyl.

The area was given this name following the 1986 accident at the Chernobyl nuclear power plant when between 4 to 6 square kilometres of coniferous forest was killed by high levels of radiation. The trees’ needles turned red (or more correctly orange) before the trees died. 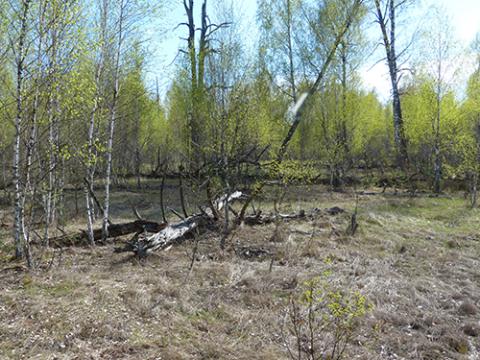 Above: The Red Forest in April 2016 showing the regeneration of understorey vegetation and deciduous (silver birch) trees which had occurred over the 30 years since the Chernobyl accident. The dead trees in the middle of the picture are, we think, remains of those killed in 1986.

The Red Forest subsequently regenerated with deciduous trees (less sensitive to radiation than coniferous species) and understorey vegetation. This area is the most anthropogenically contaminated radioactive ecosystem on earth and reports of effects on its wildlife continue to be published.

"This area is the most anthropogenically contaminated radioactive ecosystem on earth"

In July 2016 there was a severe fire in the Red Forest and local contacts reported that about 80 percent of the forest was burnt. This presented a unique opportunity to study the effect of fire on i) radionuclide mobility/bioavailability and ii) the impact of radiation on the recovery of the forest ecosystems exposed to another stressor (ie. fire). 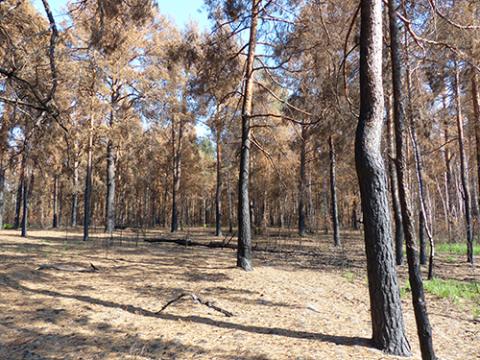 Above: The Red Forest is red again, but this is fire damage, not the effects of radiation (September 2016)

CEH is currently working with the universities of Salford and Nottingham, Ukrainian collaborators (Chornobyl Center and Ukrainian Institute of Agricultural Radiology) and the Norwegian University of Life Sciences. Together we are working as part of the NERC urgency grant entitled ‘RED FIRE’ which stands for Radioactive Environment Damaged by Fire: a Forest in Recovery.

To address the second hypothesis we are studying a range of organisms from soil biota to large mammals. We began our fieldwork in September 2016 and have additional field trips planned throughout 2017. 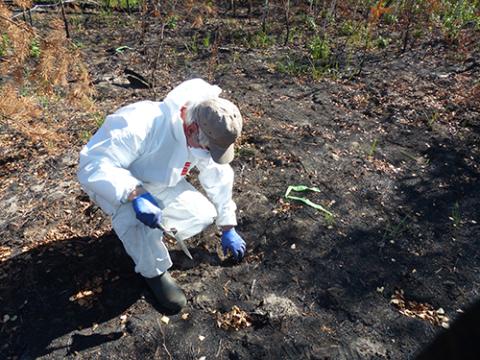 Above: Prof Nick Beresford working in a burnt area of the Red Forest (September 2016)

The Red Forest is within an area known as the Chernobyl Exclusion Zone. The human population and farm animals were removed from the Exclusion Zone following the accident and this largely ‘abandoned’ area now extends to more than 4700 km2 (approximately 2600 km2 in Ukraine and the remainder in Belarus).

Contamination in some parts of the Exclusion Zone is in excess of what we would expect to cause radiation induced effects in wildlife. However, there is a lack of consensus within the scientific community about the interpretation of many studies conducted in the Chernobyl Exclusion Zone.

CEH is leading the NERC-funded TREE project which is studying a range of terrestrial and aquatic organisms in the Exclusion Zone with the aim of helping to answer questions raised by studies which have been reported to date.