The Biological Journal of the Linnean Society's July 2015 issue (volume 115 part 3) is devoted to biological recording. The issue (guest-edited by CEH's Helen Roy, Chris Preston and David Roy) marks the 50th anniversary of the Biological Records Centre and many of the papers are based on talks given at the celebratory conference held at the University of Bath in June 2014. In addition to an editorial introduction, there are 22 papers. Our video below features David Roy, Head of the Biological Records Centre at CEH, and authors Michael Pocock and Suzanna Mason, explaining more about the papers they contributed.

The issue looks at biological recording past, present and future.

An infographic was produced for the BRC's 50th anniversary in June 2014: 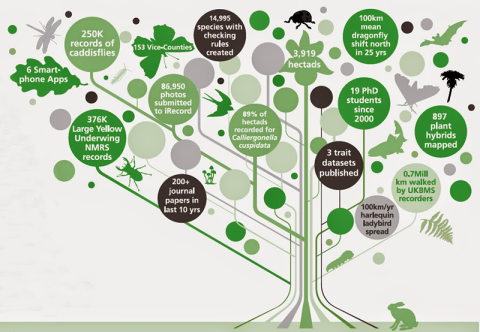