Remote sensing is a core part of CEH’s activities. Traditionally this has included the use of kilometre to metre scale spatial data collected from sensors on board satellites or manned aircraft and the use of detailed field-based point or transect measurements from handheld sensors. Recent developments in drone technologies are now allowing us to fly lightweight sensors or cameras and capture spatial data at unprecedented centimetre detail. Drone technology is affordable and very well suited for the flexible repeat collection of focused local measurements.

CEH has a number of drones which are used to monitor the environment using a number of different optical sensors. The capacity of the drones to deliver full spatial coverage at centimetre detail gives us the opportunity to study the spatial heterogeneity of habitats, while repeat observations help us capture the temporal dynamics of habitats.

This detailed information opens up avenues of research that have so far not been possible. For example, drones will help us understand how the spatial and temporal dynamics of habitats support populations of invertebrates and small mammals and how habitat heterogeneity defines the movement and survival of individuals and populations.

Detailed drone imagery from forest canopies combined with other observations will help us establish where and why trees succumb to diseases and pests. The repeat spatial drone monitoring of lakes and coastal areas will help us better understand the mechanisms driving algal blooms.

This hexacopter (6-propellers) is a professional system for carrying large sensors. Traditionally used in the film industry this UAV, pictured below, is built to a very high specification with numerous failsafe systems to ensure that it can remain airborne even when components fail. 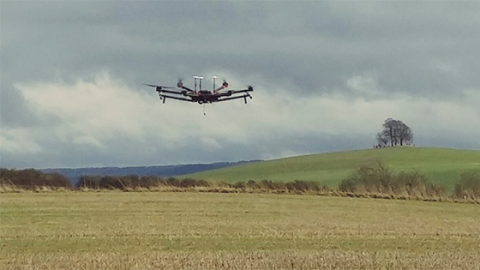 Currently we have a Ricola Ltd hyperspectral camera (500nm - 900nm) and a custom build hyperspectral sensor (400nm - 2000nm) available for deployment on the hexacopter. The hyperspectral data has the capacity to describe the chemical content (carbon, water, nitrogen, and pigments), health and age of leaves.

The Phantom is a small and relatively cheap quadcopter (4-propellers) fitted with a stabilised camera (blue, green, red). This drone setup, like the Matrice 600, can fly pre-programmed routes and is ideal for acquiring centimetre resolution aerial imagery and three dimensional landscape (height) models. However it is much smaller and easier to operate than the Matrice 600.

The QuestUAV 300 is a fixed wing unmanned aircraft that can fly pre-programmed routes and can be fitted with a range of cameras (either hyperspectral, or blue, green, red, near-infrared). Currently a Canon S100 and Panasonic LX7 are used, although it has carried heavier DSLR cameras such as a Canon 5D for high resolution data capture.

The Quest 300 can cover larger distances (maximum range of 100 km) than the rotary drones and is ideal for surveying relatively large areas, under wind speeds as high as 35 mph, with a payload of ~1 kg and for up to 35 minutes. The Quest 300 also comes with the Agisoft Photoscan Professional image processing software for generating large georeferenced scenes and surface models from the acquired imagery. 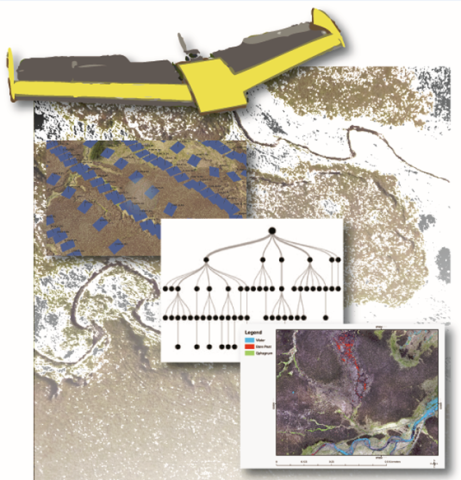