Water is again much in the news this week with widespread flooding across the UK following several weeks of very stormy weather. It's been a difficult time for many homeowners, particularly those by the coast, and the emphasis is now shifting to those living adjacent to several of our major river systems.

Yesterday (Sunday 5 January 2014), the Environment Agency published a news story naming the Thames, Dorset Stour and Frome, Somerset Levels, 'rivers' in the South East and the Severn as rivers where the flood threat remains into next week as larger rivers start to reach their peak. 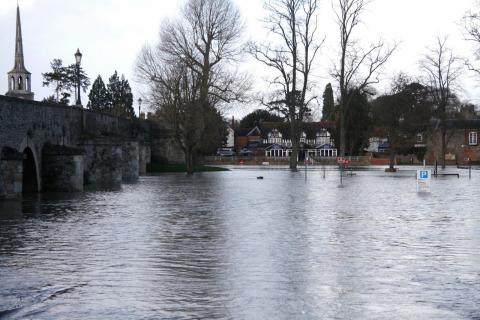 CEH has already had calls from a number of journalists asking if the current weather and flooding patterns are anything out of the ordinary. CEH science and the data archives we host play a key role in informing the UK's operational agencies during this type of event. Within CEH we have teams of scientists working on furthering our understanding of hydrological processes, water resources, water information management, hydrological status and reporting, the climate system, hydrological modelling and risk, and hydrological modelling and forecasting.

A few examples include:

The Centre for Ecology &  Hydrology jointly operates the National Hydrological Monitoring Programme (NHMP) for the UK in conjunction with the British Geological Survey (BGS). NHMP scientists produce the UK Monthly Hydrological Summary which assesses rainfall, river flows, groundwater and reservoir levels. They also operate the UK's National River Flow Archive. The NHMP also has a remit to analyse major flood and drought events in the UK and analyse long-term trends in UK hydrological data. The team publish a series of occasional reports on major hydrological events, including reports on the UK's major flood events in 2000/2001, 2007 and 2012.

The UK's Monthly Hydrological Summary is published on, or before, the tenth working day of the following month. A Hydrological Outlook for the UK is also available.

In 2012 CEH staff concluded a major project looking at "Future Flows and Groundwater Levels: British projections for the 21st century". The research looked at the impact of climate change on river flows and groundwater levels across England, Wales and Scotland and produced two unique datasets, which are now available via the CEH website, through the CEH Information Gateway and downloadable from the National River Flow Archive and National Groundwater Archive.

And finally on Friday 3 January, CEH climate scientist Chris Huntingford wrote this piece for the Guardian: "We desperately need to predict what climate change is doing to UK rainfall".

*The Grid-to-Grid hydrological model is a tool developed by the Centre for Ecology & Hydrology (CEH) for translating rainfall into river flows to predict potential river flooding. Intensive work on the Grid-to-Grid project began in 2002 at CEH and continues today in collaboration with the Environment Agency. Total NERC investment in the project (via CEH) is estimated at £1.2 million with additional funding provided by other organisations.

More photos of the flooding at Wallingford, Oxfordshire (January 2014) on our Flickr photostream