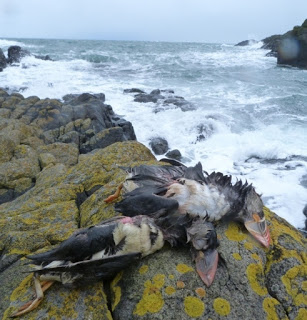 More sad images of the puffin 'wreck' as well as images of puffins on the Isle of May can be found in our recently updated 2013 Puffin 'wreck' flickr set.

This morning (Wednesday 27 March) Prof Mike Harris visited St Cyrus NNR on the East coast of Scotland. The visit, and initial investigations of a number of dead puffins collected over the last two days, has confirmed that the most  likely reason for the ‘wreck’ is the long period of very strong easterly winds making it very hard for the birds to find food. With onshore winds birds that die end up on beaches thus making the numbers involved very obvious.

“Our first priority has been to age the birds that have died. So far about half the birds examined have been adults and some definitely look as though they would have bred this year if they hadn't died. It is therefore likely that breeding populations are going to be affected in the Spring and Summer. Immature make up the other half of the sample so whilst their deaths will not have an immediate impact on breeding, the wreck is also affecting birds that would have recruited and bred in subsequent years."

He concludes "It is too early to know how many birds are going to be involved but it does look as though there will be both immediate and longer term effects at puffin colonies.” 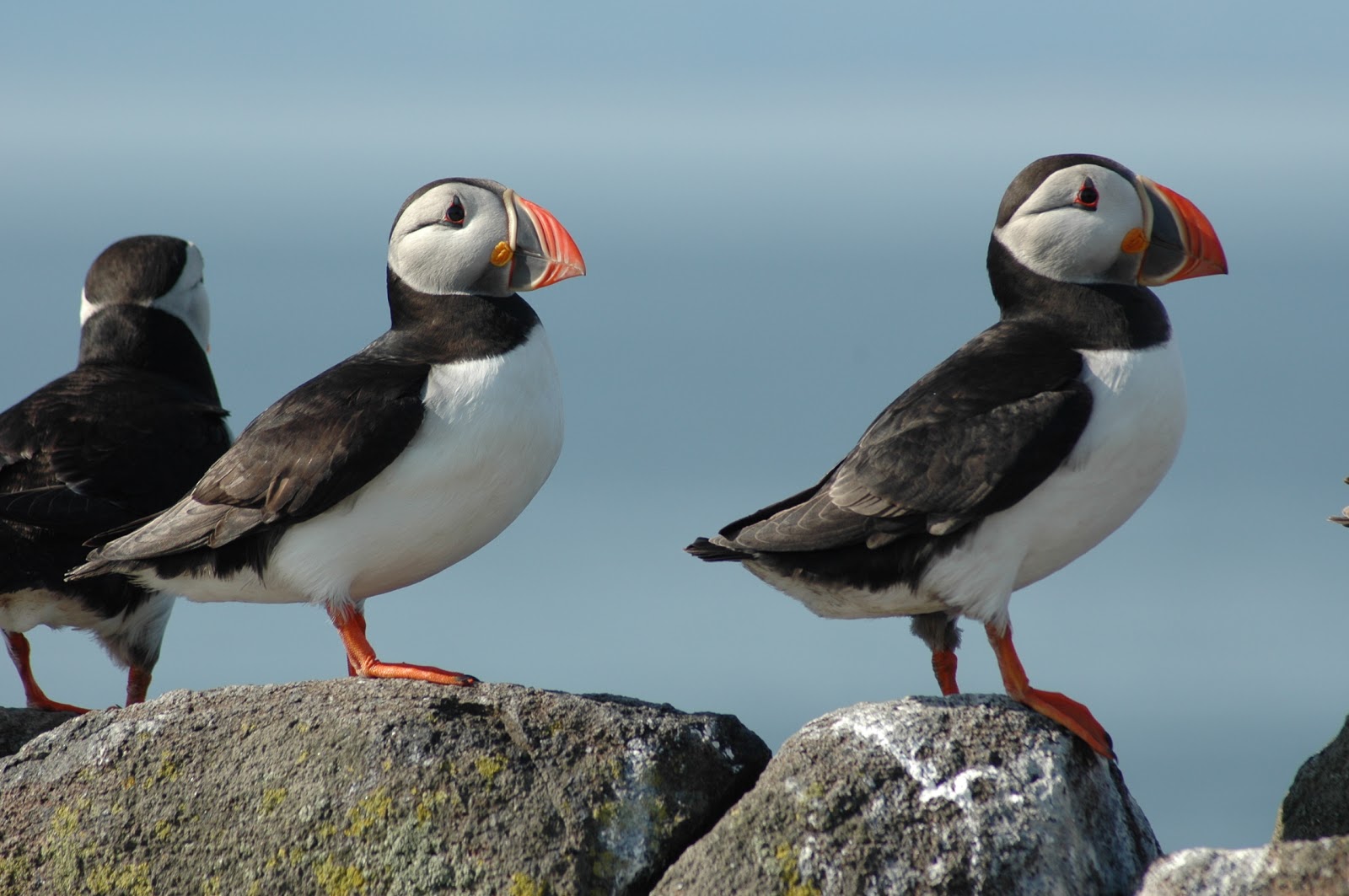 Later this year CEH scientists will be carrying out the latest five year census of puffins on the Isle of May (one of Scotland's most important puffin colonies and the largest in the North Sea). Numbers declined at the last count in 2008.

CEH are working with RSPB Scotland to monitor the situation and learn as much as possible about the cause of the wrecks. Recovery of the birds along our beaches for post-mortem examination is ongoing. You can help by reporting any sightings to us or the RSPB.

According to the RSPB website wrecks have been reported at the following locations:

In the last few hours the CEH Press Office have been receiving reports of a puffin wreck (multiple unusual deaths) on the East Coast of Scotland and the North East England. 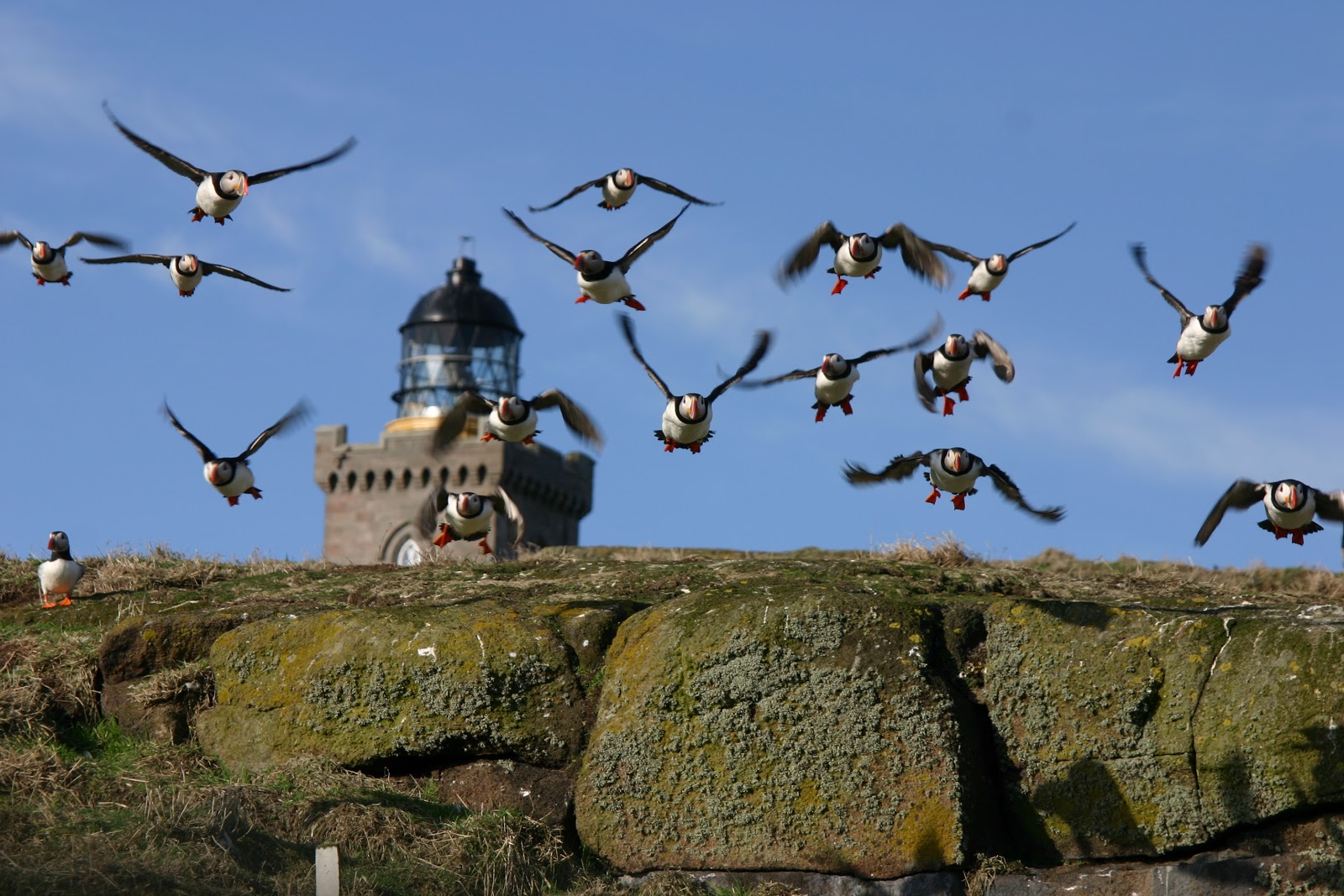 Professor Mike Harris, a research fellow at the Centre for Ecology & Hydrology and probably the world's leading expert on Atlantic puffins - he  co-authored, together with Professor Sarah Wanless, the leading publication on the bird ‘The Puffin’ (published in 2011) - says:

“Reports emerged just a few days ago of dead puffins washed up on the beaches of East Scotland and North East England. This is likely to be the biggest 'wreck' since 1947. It comes at an unusual time of year, when the puffins are heading back to land to breed, The  likely cause is the bad weather (particularly the recent run of strong Easterly winds). The birds appear to have died of starvation.”

Later this year CEH scientists will be carrying out the latest five year census of puffins on the Isle of May (one of Scotland's most important puffin colonies and the largest in the North Sea). Numbers declined at the last count in 2008, so this 'wreck' is almost certainly not good news for the long term health of Scotland's puffins.

Contact the CEH Press Office for more information and for interviews with Prof Harris.

"Wrecks of seabirds, when bird die, apparently of starvation after periods of very rough weather, are not that uncommon. However, in the North Sea the species involved are often species such as guillemots and razorbills that winter fairly close to land. Wrecks of puffins are extremely rare, probably because they winter well away from land so that when they die their bodies rarely get washed ashore.

There is currently a major wreck underway which is the largest in the North Sea for at least 60 years.

This was first noticed at the end of last week by people who regularly check the beaches of northeast England for dead birds. Then over the weekend reports started to come in of dead and dying puffins in beaches all the way north to Aberdeenshire.  Most birds were emaciated and had obviously died of starvation. The last week has seen the longest spell of strong to gale easterly winds for many a year and these had undoubtedly caused the birds severe problems and washed ashore allo birds dying offshore.

To date, I have heard of maybe 400 dead puffins and there will undoubtedly be many more, perhaps thousands, and this compares with just a handful over a whole typical winter. This will certainly be the largest wreck of puffins in the North Sea for over 60 years.

Puffins were first recorded back at colonies in early March so many puffins will now be fairly close to the main breeding colonies of the Isle of May, other colonies in the Firth of Forth and the Farne Islands and so at risk of strong onshore winds. We are just starting to do biopsies on some of the dead birds. These confirm that they are grossly under-weight and without any fat. However, many are probably only 1-3 years old, too young to be likely to breed this year since puffins do not become sexually mature until 4-5 and most do not breed until they 6-7 years old. If this first sample is typical, then the breeding population may not suffer.

The puffins at the main colonies in the area – the Farne Islands and the Isle of May National Nature Reserve– are censused every 4-5 years. A whole count of the colony on the Isle of May is to be carried out in late April this year. It may then become clear whether what has happened to numbers since the last count. Hopefully there will be little change!"

A follow-up blog post mapping the wreck was published on 12 April: Assessing the 2013 Atlantic Puffin wreck