Greenhouse gases (GHGs) modify the global energy and heat exchange in the atmosphere and have increased the global earth warming potential by 37% between 1990 and 2015. GHG emissions have been reduced by 23.6 % across the European Union (EU) since 1990, and by 36.4 % in the UK. However, Germany, the UK and France have been the major GHG-emitting countries in the EU - as reported in the Annual European Union greenhouse gas inventory, they emitted almost 50% of the total amount of GHGs emitted by the EU between 2010 and 2015.

Besides carbon dioxide and ozone, methane and nitrous oxide are potent greenhouse gases. In fact compared to carbon dioxide, methane is a ~30 times more potent GHG. It is produced via combustion and agriculture, and by livestock. Livestock manure is often used as agricultural fertilizer instead of chemical fertilizers. 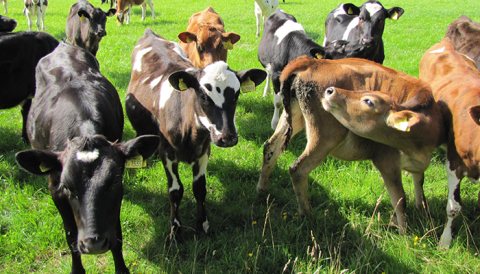 Manure can be stored as liquid slurry, on which a crust forms on top. The liquid phase has the potential to produce high quantities of methane; in fact, methane concentrations here can be more than 100 times higher than methane concentrations in the atmosphere. The surface crust stops the gas exchange between the crust and the atmosphere, allowing the formation of diverse communities of methane-oxidising bacteria (MOB) in the oxic part of the slurry crust. These microbial communities have the capacity to use methane that is produced by the slurry and can prevent methane release to the atmosphere. 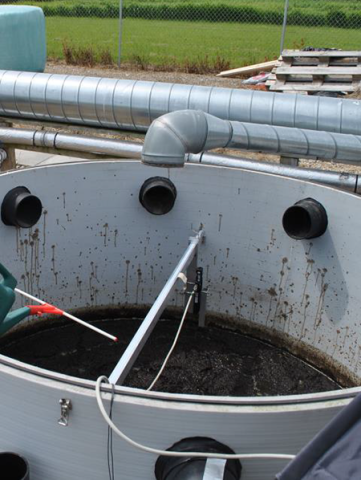 The microbial oxidation - the uptake and conversion - of methane to carbon dioxide in the slurry crust depends on the concentrations of oxygen, inorganic nitrogen and methane. Gas concentrations are often highly different across crusts because of their loose structure and variability in water content. These physical characteristics of crusts result in the formation of microsites with different gas concentrations and methane oxidising potential.

Measurements of gas gradients within a slurry crust are challenging because of the crust's fragility. In our new paper1, we report on the application of micro-sensors in a slurry crust to measure gradients of oxygen and nitrous oxide. We also tested the effects of inorganic nitrogen forms and oxygen concentrations in the slurry crust on the activity of different MOB (Type I and II).

Table 1: Two known types of methane-oxidising bacteria (MOB) are present under contrasting gas and nitrogen concentrations. *In our work we show that MOB Type I are also highly involved in methane-oxidation under high methane concentrations

We fed isotopically distinct methane (13CH4) to the microbial community in the crust. These crusts were incubated under varying oxygen and methane concentrations, and with different nitrogen forms.

Our results contribute to the development of slurry storage systems and the associated aim of reducing emissions of methane.

The study was partly funded by the Danish Agency for Science, Technology and Innovation.