Plant hormone signals and climate models, plus a mathematical surprise

A new study examining the links between soil moisture and leaf stomata should be of interest to both plant physiologists and climate modellers. It was published in the journal Ecological Modelling (27 January 2015, Ecological Modelling 300 (2015) 81–88), and is open access, so freely accessible. Below the lead author, Dr Chris Huntingford of the Centre for Ecology & Hydrology (CEH), explains what they did and how the analysis reveals an unexpected mathematical twist:

“A small team of us have just published a paper on assessing how the equations link together that describe ABA (abscisic acid) messaging in plant systems. Possibly more than most pieces of mathematical analysis, our study turned into a bit of an adventure, including an unexpected outcome.

ABA is a hormone which passes through vegetation, and provides a signal to leaf stomata regarding the amount of soil moisture available. Stomata control both evaporation and photosynthesis and, if soil moisture is depleted, then generally plants close such pores as a protection mechanism during periods of drought.

Climate models are designed to estimate adjustments in near-surface temperature and humidity (amongst many other quantities) in response to raised atmospheric greenhouse gas concentrations. However the land surface is a fully coupled part of the climate system, not simply responding to any imposed adjustment to weather conditions, but also affecting them. This can be through multiple feedbacks, one of which is how rain water is returned to the atmosphere via evaporation. In addition, any better understanding of transpiration losses by vegetation can aid impacts planning of viable crops for future perturbations to the climate system.

Despite this need, many land surface descriptions within climate models contain only an empirical semi-linear response to soil stress. This varies from no effect at a critical moisture level, down to complete shut-down at a prescribed soil moisture wilting point.

Detailed laboratory and field measurements of ABA concentration at the leaf level reveal a strong dependence on both soil moisture and the actual transpiration rate. Concentration levels then influence the amount to which stomata open. This allows the opportunity of building more accurate, chemically-based descriptions into the functioning of the terrestrial part of climate models, with performance verifiable against ecological data. Hence the first role of the paper is to describe the equations in full, and in that context. 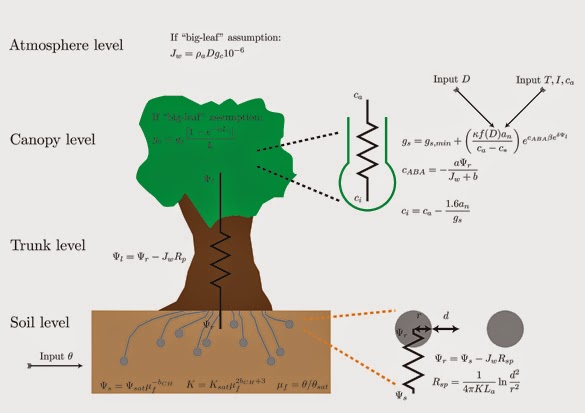 At the same time, where climate models frequently do excel is in non-water stressed representation of photosynthetic response, including the impact of temperature and light effects. But these descriptions are not included in models of ABA control on stomata, giving the opportunity to merge both. We are not the first to suggest this (see earlier paper, Dewar, 2002) but here, as we unite equation sets, we fully analyse their projections of such a common model to soil moisture, light, temperature, CO2 concentration and surface humidity – our Figure 1 within the paper. This can be important to check as such linking can create odd cross-effects between model components. Fortunately we find this more ABA-based combined model does reproduce the salient features of expected stomata response across a range of imposed environmental conditions. We offer this as a possible future candidate for inclusion in climate models.

There is, however, also a mathematical surprise!

Despite our linking together in a common framework, which generally makes models more complex, we find that equation re-arrangement may actually simplify things. Stomatal response can be re-written as a function of soil moisture, evaporative flux, atmospheric CO2 concentration and photosynthetic flux only. We are not suggesting that this is necessarily what the stomata “see” to guide their responses (eg with drivers such as temperature occurring instead of via influence on photosynthesis). But the ability to write the equations in this form links to a long-term “store” of the hydrological cycle, ie soil moisture, and to a more instantaneous flux, ie transpiration, the latter fluctuating more with weather conditions.  And, in a symmetry for the carbon cycle, links to the “store” of atmospheric CO2 concentration, and again to more immediate fluctuations of photosynthetic uptake.

Could plants therefore respond to the more slowly changing stores in the carbon and water cycles, but using fluxes to provide time-evolving corrections dependent on the precise passing meteorological conditions?

Although our priority is to try and contribute towards improving process representation in land surface models, we really hope that other authors might investigate further the “stores-fluxes” concept that the equations of this model hint at.”

The full paper is open access and can be read by anyone. The work was carried out by scientists from CEH, Exeter University, Lancaster University and the IUCN.