Our freshwater ecologists find all sorts of amazing wildlife when sampling in lakes and rivers, including microscopic plants, tiny grazers and predators, and species that appear to blur the boundary between plants and animals (are they plants that can eat and swim, or animals that photosynthesise?). You will only see many of these fascinating creatures under the microscope. Changes in the abundance and diversity of these animals tell us how lake ecosystems function and can also indicate the quality of the water. 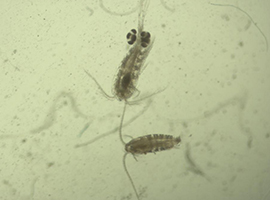 The species in the following videos were all found in water samples from Lake Carter which is situated within the Lancaster University campus, where CEH has an office. However, CEH has also monitored populations of plankton in the Cumbrian Lakes in England and at Loch Leven in Scotland for decades.

Euglena species are protozoa that are capable of photosynthesising (like plants) and consuming other organisms (like predatory animals). They are common in freshwaters. In the video below you can see the red “eye spot”, which helps Euglena to detect changes in underwater light levels.

The video below shows an abundance of microscopic yellow-green “balls” rolling through the water. These are colonies of the algae Syncrypta/Synura, each one made up of many separate cells with whip-like tails (flagella) that are used for swimming. Speeding through the field of view are rotifers; tiny grazers that feed upon the algae. They capture their prey with a ring of beating hairs, called a corona, which draws water into the mouth.

Trachelomonas are another member of the photosynthetic freshwater plankton community. They live within a shell-like structure (lorica), the details of which can be used to identify species. The red "eye spot" is clearly visible in this specimen.