It was wonderful to see CEH Emeritus Fellow Dr Mark O Hill made an Honorary Member of the National Biodiversity Network Trust at the recent NBN 2017 Annual Conference. Mark was given this honour for his outstanding personal contribution to biological recording. Mark has been recording bryophytes for over 50 years in association with the British Bryological Society, which he joined in 1965. For much of this time he worked as a professional ecologist at CEH and his recording was a spare-time activity, but he was appointed head of the Biological Records Centre in 2003 and from then until (and beyond) his retirement in 2010 he made major contributions to the techniques for analysing biological records. 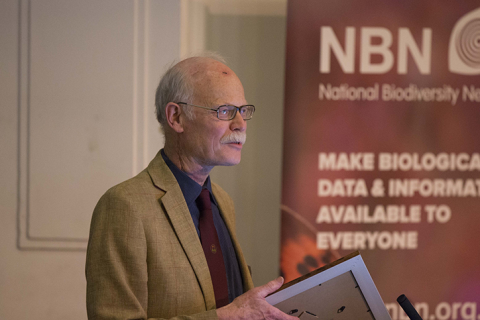 Although it is hard to summarise such an outstanding career as Mark’s, the following achievements played a key role in his receiving this award: 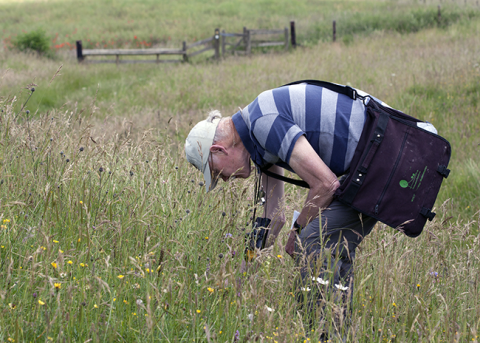 Mark recording in the field during the BRC 50th anniversary celebrations

Although biological recording played a very large part in Mark’s career, he is also a world renowned mathematical ecologist, and has contributed numerous insights and computational tools that have supported developments in community ecology and biogeography, as well as taxonomy. Mark was the first ecologist to note the mathematical unity underlying the concepts of species richness and the Shannon and Simpson diversity indices – indeed, his suggested transformations of these indices are still referred to today as ‘Hill numbers’, and have recently received renewed attention in both community ecology and genetics through the work of Lou Jost and Ann Chao. Mark’s paper ‘Diversity and evenness – a unifying notation and its consequences’ is one of the most widely cited papers in ecology from the 1970s, and one which still has both practical and analytical implications for analyses today.

Mark’s many other significant contributions to ecology include Detrended Correspondence Analysis, Hill-Smith ordination, TWINSPAN, PLANTATT and BRYOATT, and TABLEFIT. The latter is particularly widely used in applied ecology and consultancy, matching vegetation data to the existing categories of the British National Vegetation Classification. Mark’s broad expertise is unlikely to be matched again this century!

Mark’s broad expertise is unlikely to be matched again this century!

Meanwhile Prof Helen Roy was another recipient of Honorary Membership of the NBN Trust at the recent conference. Helen’s award was in recognition of her unique contribution to biological recording through the running of the UK Ladybird Survey, as well as recognising her important role at CEH and the Biological Records Centre in the wider NBN data-provision process.

Over the past ten years or more, Helen has been a tireless enthusiast for public engagement in biological recording. Her academic work has also demonstrated to wider audiences the value of broad-scale NBN data in analyses of biodiversity functions and impacts. Read more about Helen’s work via her staff page and blog posts and follow her on Twitter @UKLadybirds

Everyone at CEH congratulates both Mark and Helen on their well-deserved awards!

Yep, Dr Mark Hill is a hero to botanists, bryologists & ecologists (and a lovely bloke to boot). Great news that he has been awarded @NBNTrust honorary membership :-) https://t.co/jZrvSBDSJM