Life inside an algal bloom

What lies within a surface scum of algae? Dr Ellie Mackay investigates... 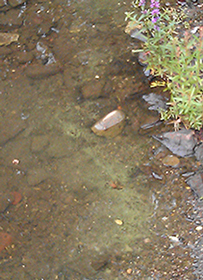 Under the microscope, we can see a whole world of organisms within an algal bloom dominated by cyanobacteria, which are sometimes called blue-green algae. An amazing array of life exists in just a small sample of water taken from the surface of Windermere in the English Lake District (see the faint surface scum pictured right). This was collected on a warm and calm day in early August as part of CEH's long-term lakes monitoring work.

The first video (below) shows Ceratium hirundinella, a dinoflagellate phytoplankton. They propel themselves using two flagella, one around the centre of the cell and the other stretching behind the cell, which can be seen in the video. The protrusions on the cell, which are really characteristic of this species, are known as horns. They are actually mixotrophic, so can gain energy through both photosynthesis and by ingesting other small organisms.

This was the first time I had seen a Ceratium swimming before - it's fascinating to see live samples!

In the second video (below), the protozoan Vorticella sp. is attached to a colony of cyanobacteria called Anabaena sp. Vorticella are peritrich ciliates, which attach to surfaces with a long, contractible stalk. They have a circle of hair-like cilia around the top of the organism that are used to create a water current and aid the ingestion of food particles such as bacteria. The large number of Vorticella on this colony of algae is creating sufficient current to move the colony around. This may be beneficial to both organisms.

In this final video (below) we can see an Anabaena colony more easily, it is composed of round cells joined together forming a long chain. There is also evidence of specialist cells in this colony with the longer, broader cells being akinetes, which are similar to spores, allowing the Anabaena to go into a resting stage. The clear round cells are heterocysts which enable the colony to fix nitrogen, and may imply that dissolved inorganic nitrogen is in short supply in the water. There is a lot of activity in the colony as a number of small protozoa, probably ciliates, appear to be feeding on the cyanobacteria.

You can see more great videos of freshwater organisms under the microscope on our YouTube channel!