When the harlequin ladybird, Harmonia axyridis, arrived and settled in the UK there were many questions in relation to how it would interact with other aphid-feeding species. It was known to be a voracious and generalist predator and so it was predicted that competition and so-called intraguild predation (in which predators not only eat their shared prey – aphids in this case – but also eat each other) would be important factors shaping the communities of insects feeding on aphids.

Through experimental research and also using the large-scale and long-term ladybird datasets gathered by volunteers over decades of biological recording, we were able to demonstrate that the harlequin ladybird could adversely affect a number of other predatory species including, perhaps most notably and dramatically, the 2-spot ladybird, Adalia bipunctata.

We have also been thinking about other species that interact with ladybirds – their very own parasites and specifically some parasitic flies and a delightful wasp called Dinocampus coccinellae. 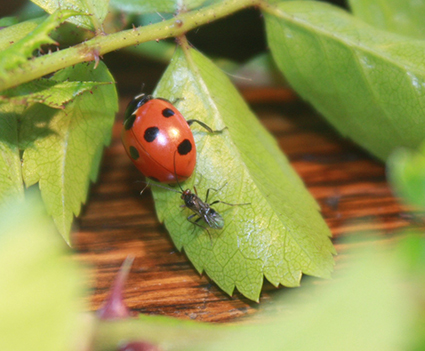 So Katie Murray, PhD student with Matt Tinsley (University of Stirling) and myself, came up with the wonderful idea of The Ladybird Challenge.

People across the country have contributed so much to our research on ladybirds by sending in records and often intriguing observations. The Ladybird Challenge provides another opportunity to get involved while still contributing to the ongoing UK Ladybird Survey.

The Ladybird Challenge invites people to count 7-spot ladybirds and note how many are accompanied by the characteristic D. coccinellae cocoon – perhaps none, perhaps all. It is as simple as that. 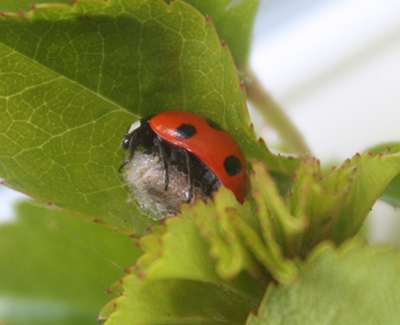 The characteristic cocoon of the Dinocampus coccinellae wasp parasite between the legs of a 7-spot ladybird. Photo: Katie Murray

It will provide another piece of what is proving to be an extremely complex ecological puzzle. I am delighted that we are gradually revealing intriguing insights through our collaborations with thousands of volunteers across the UK.

The Ladybird Challenge website: send in records of 7-spot ladybirds and whether or not they have D. coccinellae cocoons. Cocoons are easy to spot - they are nearly the same size as the ladybird and are found between its legs.

UK Ladybird Survey: continue to send in your sightings of all ladybirds

Katie Murray introduces The Ladybird Challenge in a short video:

An adult wasp lays an egg inside a ladybird. The egg hatches into a larva and lives inside the ladybird until it is ready to pupate. It wriggles out from the ladybird and spins a cocoon (pupa) between the legs of the ladybird, fixing the ladybird to the surface. Amazingly the parasite leaves the leg muscles of the ladybird intact so that the ladybird twitches over the cocoon giving it protection. Eventually the adult wasp (they are all female) emerges and with 200 eggs to lay it begins to look for new hosts.