In two new papers published in Atmospheric Chemistry and Physics (ACP) and Environmental Research Letters (ERL), we highlight how UK domestic fine particulate matter pollution is influenced by long-range transport of secondary aerosols originating from continental Europe. Both papers make use of CEH-led research into the development and application of advanced atmospheric chemistry transport models such as EMEP4UK.

In the ACP article, we investigate which policy actions to reduce the UK ambient concentrations of fine particulate matter (PM2.5) would be the most effective. This work has also contributed to the 2015 report of the UK Air Quality Expert Group (AQEG), an Expert Committee which provides independent scientific advice on air quality to Defra. The article concludes that the UK ambient concentrations of PM2.5 can only be controlled by domestic emission reductions to a limited extent. For a present year, the model results showed that either reducing primary particulate matter emissions, or ammonia emissions, reduced PM2.5 concentrations in the UK by a similar amount. For the future we expect atmospheric composition to change, and as a consequence the model results suggest that in 2030, reducing emissions of primary PM2.5 would be more effective.

The AQEG report (2015) concludes as well: “The analysis has provided some new insights into the most effective ways of reducing PM2.5 mass in the UK. The work has shown that total PM2.5 mass is relatively insensitive to reductions in any one individual component, such as the precursors of SIA (secondary inorganic aerosol) or primary PM2.5 emissions. The relative insensitivity of SIA to precursor emission reductions is due largely to non-linearities in the relationship between SIA precursors and the resulting ambient concentrations.

The article in ERL focused on a specific episode of very high concentrations of fine particulate matter over the UK (and most parts of Western Europe), which occurred in the spring of 2014. While the event was widely referred to be caused by ‘Saharan Dust’, the model analysis presented by Dr Vieno and his colleagues illustrate the complexity of such events. The paper provides compelling evidence from both model simulations and the analysis of detailed particulate species monitoring data from two of the UK EMEP1 ‘Supersites’, pinpointing the main contribution to this event as secondary inorganic aerosols (SIA) and specifically ammonium nitrate. 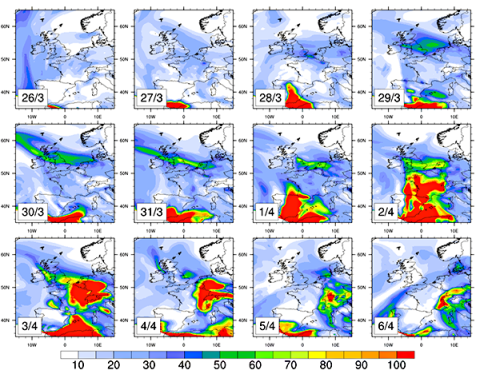 The findings presented in both articles are of particular relevance for policy makers, as they highlight the important role of international collaboration in tackling transboundary air pollution problems. We suggest that modelling studies on national and regional scale, such as these, are very important as they provide quantitative evidence for the design of future emission control policies, which need to take transboundary transport of pollutants and precursors into account.

Dr Massimo Vieno is the lead developer of the EMEP4UK model and Dr Stefan Reis leads the Modelling & Integrated Assessment group. They work for the Centre for Ecology & Hydrology.

1 EMEP – the Co-operative Programme for Monitoring and Evaluation of the Long-range Transmission of Air Pollutants in Europe (see http://www.emep.int/index_facts.html)