Grazers in the plankton

Dr Stephen Thackeray explains more about some of the fascinating animals that lie under the surface of our freshwaters...

Freshwater scientists often refer to grazers within the plankton. These grazers feed upon photosynthesising algae, and are themselves eaten by predators. However, grazing in the plankton is unlike the more familiar process by which sheep graze in pastures, or deer browse in woodlands. This is because planktonic grazers completely consume the organisms that they feed on, and so grazing in the plankton is actually much more like predation. Plankton grazers are very diverse.

Above: This is the ciliate Stentor, collected from Lake Carter. As far as ciliates go, Stentor is huge (this one is approximately 400 microns in length). This organism can be found in two forms. Firstly, it may be found attached to underwater surfaces and, when in this form, the body adopts a trumpet shape with a narrow stalk attaching to the substrate. However, the video shows the other free-swimming form of Stentor. When in this state, Stentor adopts a more pear-like shape. In the video, the hair-like cilia can be seen beating vigorously, creating the water currents needed to gather food. Stentor can also host symbiotic algae within its body, resulting in bright green colouration.

Above: This is the rotifer Synchaeta which, unlike Stentor, is a multicellular animal. Unlike many rotifers, Synchaeta lacks a hard external casing around its body (a lorica). As can be seen from the video, this allows a great degree of flexibility in the body. Synchaeta is (usually!) a fast swimmer, and can be found cruising around and consuming smaller members of the plankton. 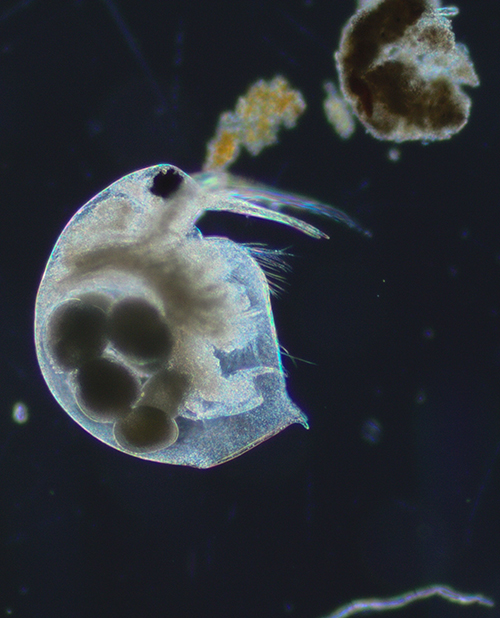 Above: Bosmina is a member of the microscopic crustacean community within the plankton. These creatures may approach 1 mm in size and feed upon algae and protozoa. This animal is a female, and is carrying eggs within a brood pouch underneath her carapace. Bosmina are frequently found in the spring time in temperate lakes. 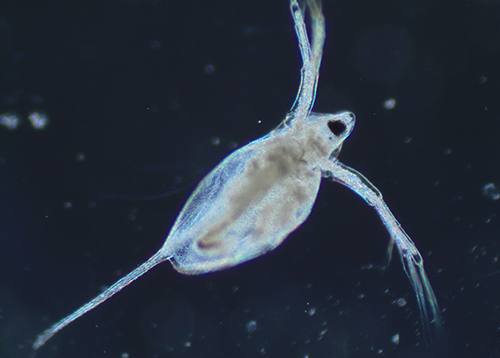 Above: Daphnia, another member of the crustracean group known as the Cladocera, is slightly larger than Bosmina. These creatures are also commonplace within the spring plankton of temperate lakes. Daphnia feed on a wide range of algae, though not some of the largest species, by a process similar to filter feeding (though there is some debate about the exact mechanics of feeding in these organisms). Daphnia are used very frequently in experimental studies of the crustacean zooplankton.

Crustacean zooplankton communities are being monitored in some of the larger Cumbrian Lakes by CEH, as part of an ongoing monitoring scheme that started in the 1940s. Changes in these populations can tell us a great deal about the pressures acting upon lakes in an ever-changing world. Zooplankton populations in the English Lake District have helped to demonstrate impacts of climate change and nutrient enrichment upon freshwaters to the global scientific community. In this way, they form an important part of the puzzle of understanding ecosystem-scale changes in freshwaters.