Ozone and Climate – Restored by a world united

A blog post by Dr Stefan Reis looks back at a major international ozone conference held in Edinburgh this month.

Today, 16 September 2016, is celebrated as the International Day for the Preservation of the Ozone Layer with the motto: ‘Ozone and climate: Restored by a world united’ (follow #OzoneDay on Twitter to learn more). Scientists from the global research community have noted first indications for a recovery of the ozone layer. This, and other current topics around ozone research brought more than 300 scientists to Edinburgh in early September to hold the Quadrennial Ozone Symposium (QOS) 2016.

Every four years, the International Ozone Commission organizes a symposium to discuss ozone science and research. The 2016 QOS gathered scientists from all over the world. From September 1 – 10, the Symposium itself and several side events took place, fostering discussions on ozone research and the current status of atmospheric ozone, including the preliminary results from this year’s ozone hole. 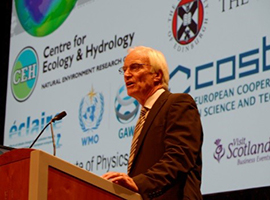 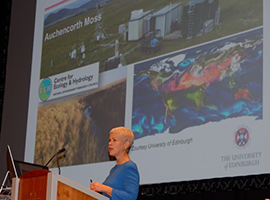 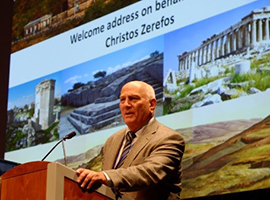 Despite its small abundance, ozone is an essential component of the atmosphere, protecting life on Earth by filtering out damaging solar ultraviolet radiation. When present at elevated concentrations at ground level, ozone is also a powerful oxidant, harmful to human health, crop production and natural ecosystems.

In the last third of the 20th century, ozone in the stratosphere (above 10 km) was depleted by human-produced chlorine and bromine gases emitted to the atmosphere. The most prominent feature of this depletion is the Antarctic ozone hole1, which began to form in the early 1980s and is still recurrent today. Thanks to the Montreal Protocol signed in 1987, emissions of ozone depleting substances (ODSs) were halted and their concentrations are now slowly decreasing in the atmosphere. 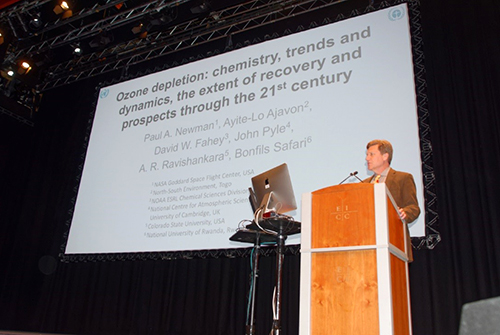 Pictured right: A keynote talk by Paul A. Newman (NASA) highlighted what we currently know about trends of stratospheric ozone depletion and recovery

Concentrations of ozone in the troposphere (lower atmosphere) show great spatial variability. This was highlighted by the keynote by Kengo Sudo (Nagoya University) on Interannual variability and long-term trends in global tropospheric ozone and related chemistry during recent decades. In all industrialised countries, elevated tropospheric ozone poses a direct threat to human health, crops, and ecosystems3. Tropospheric ozone is produced by reactions amongst organic compounds and nitrogen oxides. While tropospheric ozone can be produced naturally, man-made precursor emissions are still rising in rapidly developing regions, further increasing tropospheric ozone levels. The lifetime of tropospheric ozone of about three weeks which means all regions of the northern Hemisphere share similar background concentrations. There are now concerns that climate change will enhance natural precursor emissions, increase the stratospheric source of ozone to the troposphere, and reduce the uptake of ozone by vegetation. A keynote by Owen Cooper (NOAA Earth System Research Laboratory/University of Colorado) introduced the latest findings and work on the Tropospheric Ozone Assessment Report (TOAR).

Our ability to follow future ozone trends is crucially dependent on the satellite and ground-based ozone observing systems. The maintenance and continuation of observations of ozone and associated species is vital for improving our scientific understanding of the interactions between climate change and ozone in the stratosphere and troposphere, and for assessing the success of the Montreal Protocol. The current state of the art in relation to ground-based and air/space borne monitoring platforms were introduced by keynotes by Valerie Thouret (CNRS) and Anne Thompson (NASA/Goddard Space Flight Center/Earth Sciences Division).

With more than 300 delegates from 39 different countries attending, 5 keynote talks, 75 oral presentations and 270 posters, the Symposium covered the breadth and depth of ozone research. Key topics were stratospheric and tropospheric ozone observations and modelling, interactions between ozone, atmospheric chemistry and climate, ozone measurement techniques, effects on human and ecosystem health, and on agricultural crops. Effects on vegetation and ozone as a threat to food security were the key topic of the keynote delivered by Lisa Emberson (Stockholm Environment Institute – York). 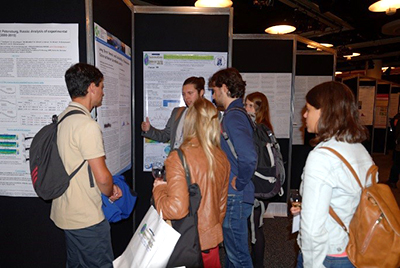 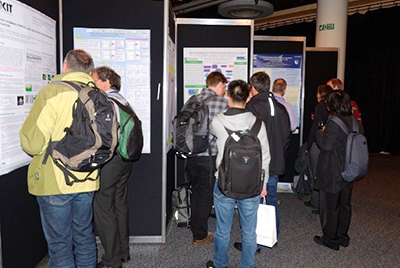 Above: Intense discussions around a large variety of posters covering all aspects of ozone research

Following on from the discussions around talks and posters during the week, two forward-looking talks set the scene for the panel discussion on the final day, focusing on future challenges of ozone research, in the context of varying trends and including emerging threats to human health and food security due to ozone effects, for instance in fast developing regions in East and South East Asia. 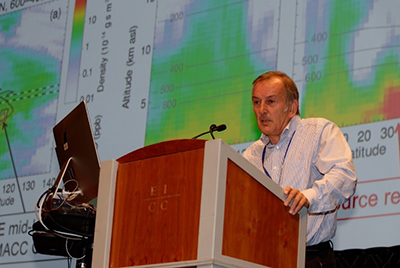 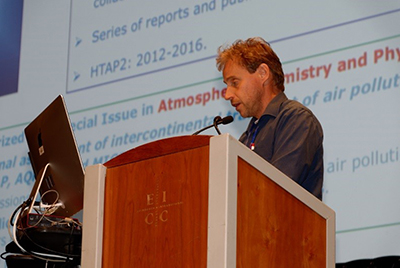 With a focus on integrating across a wide range of scientific topics and disciplines, spatial and temporal scales, and the complexity of the challenges to robustly identify trends, the communication of the research findings to policy decision makers played a vital role in the concluding discussions. 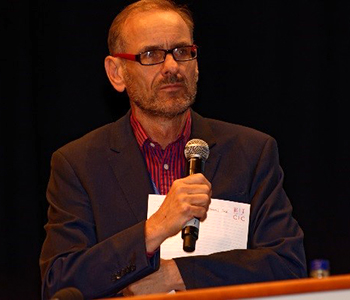 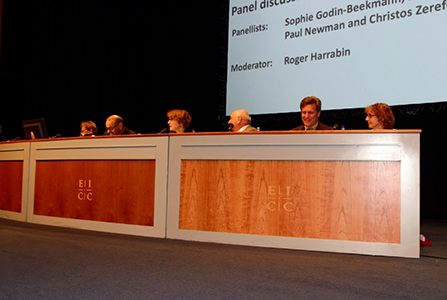 Roger Harrabin, BBC's Environment Analyst, moderating the panel discussion on the final day of the Symposium, addressing future research challenges for ozone, and highlighting the relevance of communication at the science-policy interface.

Before, during and after the Symposium, a number of side events took place. Under the auspices of WMO/GAW, NDACC and SHADOZ, an ozone sonde expert workshop addressed outstanding instrumental and operational issues, progress made in the ozone data quality assessment (O3S-DQA) with the homogenisation of long-term ozone sounding records and the preparation of design of JOSIE 2017/2018 experiments. A training school organised by the EU BrewNet COST Action ES1207 was primarily intended for Brewer Ozone Spectrophotometer operators and managers. It focused on set up and basic maintenance, data handling and submission, and diagnosing problems.

A Dobson Ad Hoc committee meeting considered what the future holds for the ground based network of Dobson ozone spectrophotometers a world with expanding instrumentation and needs, after 90 Years of monitoring the ozone layer.

Another side meeting followed on from the Symposium on September 9-10 and addressed the fundamental question whether the positive trend in ozone in the post-2000 period is statistically significant or not? Among topics for discussion were uncertainties of ozone trend estimates, statistical tools, comparison between observation and model trend estimates, and next steps for the upcoming WMO ozone assessment of 2018. 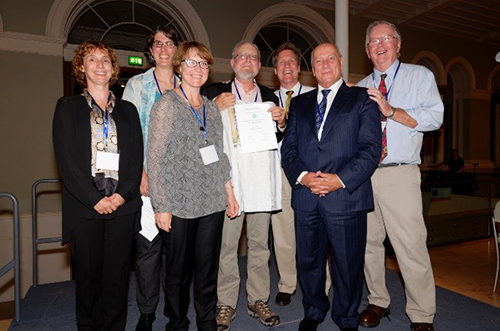 Finally, as a highlight of the QOS, two prestigious prizes were awarded, the Dobson and the Joseph C. Farman awards, to outstanding scientists advancing ozone research.

Pictured right: During the QOS2016 dinner, Birgit Hassler (NOAA) received the Dobson Award for her work which provides the scientific community with an essential foundation for reliable detection of stratospheric ozone recovery. Bob Evans (NOOA) was awarded the Joseph C. Farman Award, which is granted to outstanding scientists who have created and used high-quality, long-term time series of atmospheric measurements related to the study of atmospheric ozone and/or surface ultraviolet radiation.

Even though the 2016 Quadrennial Ozone Symposium has concluded, a range of outputs from the event are still forthcoming. The proceedings of the QOS are already available on the event website. A high level summary of the key findings and a special issue comprising new material presented at the Symposium are in preparation and will emerge in the near future.

CEH scientists were heavily involved in organising the QOS: David Fowler chaired the Scientific Programme Committee and I led the local organising team, keeping oversight of the preparations of the whole series of events with the support of Massimo Vieno and Rachel Beck. CEH science featured in an oral presentation by Mhairi Coyle on "Measuring ozone fluxes to terrestrial surfaces by eddy co-variance and aerodynamic methods" and contributions to other presentations and posters, as well as Gina Mills serving as session convenor on ozone effects.

Finally, a fully booked field trip to the WMO Global Atmosphere Watch (GAW) Regional Monitoring Station at Auchencorth Moss allowed 50 delegates to get a first-hand experience of the large variety of atmospheric measurements conducted there. Last, but not least, I have been invited to join the International Ozone Commission to contribute on the topic of tropospheric ozone research, an opportunity to which I'm much looking forward.

1 This phenomenon corresponds to an important decrease (larger than 40 %) of ozone total column during the springtime over an area larger than the Antarctic continent.

Read tweets from the Ozone Symposium in our Storify