Freshwater futures (aka lake ecology for Key Stages 1 and 2)

For British Science Week 2016 (11-20 March) I was invited to visit a local school (Quernmore Primary School) to talk to the children about my job as a scientist, what it means and what I do at work. I came along after a succession of other visitors who had enthused the children about space science and the fascinating (and gruesome) habits of parasites of various sorts. Given the excellent demonstrations that the children had already seen, and the fact that some of those children were mine, I really felt I had to come up with the goods!

I started out with just a small number of slides showing pictures of aspects of my job, such as field work and lab work, and of the plants and animals that you can find in lakes. This gave the children lots of opportunities to talk about what a scientist does in general, and what ecology is all about in particular. The children shared lots of stories about what they saw when visiting local lakes with mum and dad, to go fishing or boating. I also got thoroughly interrogated on which animals could be found in lakes – frogs and toads, otters, seals, octopuses….? 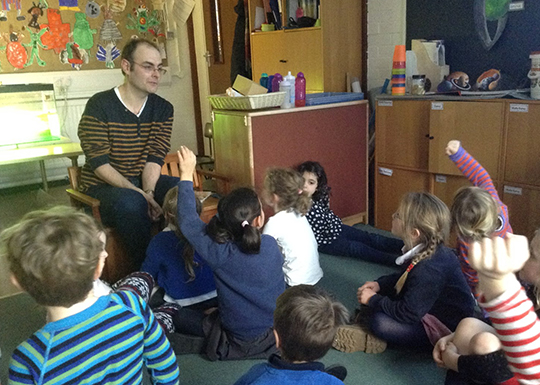 Despite verging on the marine in some cases, the questions came which such enthusiasm that it was nothing other than totally heartening that the children had an awareness of nature and diversity in general terms. At this point I also brought out one my own personal favourites from the Science Photo Library - electro-swing pond life (if you don’t believe me, look at this video). Looked now? Good isn’t it?! There was actually a little bit of dancing in the classroom!

My biggest self-imposed challenge was to create a lake-in-a-tank, using an aquarium borrowed from CEH (thanks to Tom Pottinger for trusting me with that). I thought this might be a nice, visual, way of showing stratification in lakes. For the children, I described this in terms of two lakes sitting on top of one another, with the one with the “heaviest” water sitting at the bottom. I freely admit that I cheated a little with this, opting to create the effect by piping coloured salt water underneath a layer of fresh (tap) water, rather than heating the surface water for an extended period of time. The visual effect was just the same though: a rather vivid layer of green (food colouring chosen by my daughter) beneath a layer of clear water. I made the effect more intense by lighting it from the back. We then used this tank to show how habitats for animals vary with depth, and how storms affect lakes (cue hair-dryer). This went down very well and, yes, I did make it absolutely clear that use of electrical items near bath tubs at home is absolutely not to be recommended… 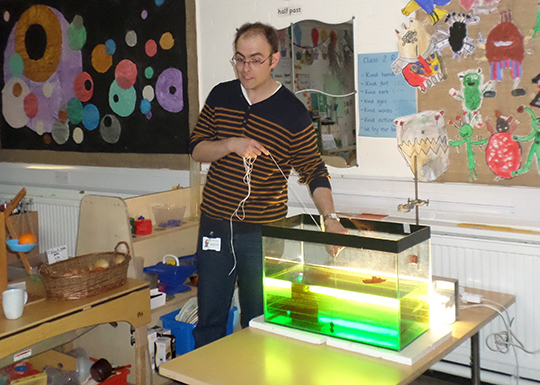 Next up, I attempted to link up with the space theme that the school had recently been exploring with the children. We dangled a home-made “satellite” (well, a box covered in shiny wrapping paper) from the classroom ceiling and used this to explain to the children how remote sensing can be used to find out about lakes from around the world. Bear with me on this one! This involved three very willing volunteers who played the parts of the sun (holding an LED torch), a clear-water lake (a small mirror) and lake choked with algae (another small mirror, covered in green plastic). I then showed my “sun” how to shine onto each “lake” and reflect light onto the “satellite” overhead. The reflection was either white or green, and showed how satellites detect changes in the “mixture of colours” that make up sunlight and use this to tell us about the ground and lakes far below. Though simple, this proved really effective and the younger children “oooh-ed” and “aaah-ed” as though we were orchestrating a mini firework display.

All in all the visit went well and, when asked by their teacher, a good few children said they’d like to be a scientist. My children also appeared unembarrassed by me being there…so, it seemed like success to me! Let’s all hope that some of these children, and others like them, continue to be curious about the machinations of nature, and motivated to care for it in the future.