Dr Helen Roy of CEH is among the scientists behind the UK Ladybird Survey which, thanks to the help of the public, has monitored the rapid spread of the non-native harlequin ladybird in the UK from its first confirmed appearance in 2004. Coinciding with a new paper in Ecological Entomology, Helen looks back at ten years of harlequin ladybird recording.

"The harlequin ladybird (Harmonia axyridis), heralded as “the most invasive ladybird on Earth”, was first recorded in the UK in October 2004. Within a few months the online Harlequin Ladybird Survey was launched as part of the wider UK Ladybird Survey. Over the last decade, tens of thousands of people have contributed their sightings of this invasive non-native ladybird (and other species of ladybird) to the UK Ladybird Survey.

"The result - a unique dataset tracking the invasion of a non-native species from the moment of arrival.

Today (20 May 2015) we celebrate the contributions of these inspiring volunteer recorders through the publication of a paper describing advances in understanding of the ecology of the harlequin ladybird in the UK. The paper builds on a paper published in the same journal in 2006 which made predictions about the impact of the harlequin.

There have been many exciting discoveries over the years and some rather bleak messages too. Much of the research on this species would have been impossible without the volunteer recorders. We have learnt so many lessons from these ladybirds.

The next ten years

Much of the research on this species would have been impossible without the volunteer recorders. We have learnt so many lessons from these ladybirds. Dr Helen Roy, CEH

Collaboration and working in partnership is so important and we have been delighted to have so many opportunities to work with so many people and organizations over the last ten years. We want to thank everyone who has contributed – it has been a privilege to work with you all. We hope that people will continue to be part of the UK Ladybird Survey. The smartphone app, iRecord Ladybirds, ensures that it is extremely easy to record sightings of all ladybirds. An incredible 12000 records have already been contributed through the app.

"So, if you see a ladybird, please record your sighting. Every record counts!" 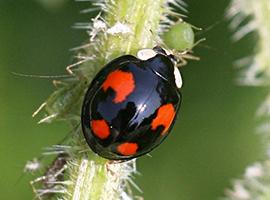