Dr Harry Harmens of CEH and Dr Mike Ashmore of SEI-York are among the co-authors of a new paper* looking at the risks from current and future concentrations of ground-level ozone to biodiversity in many regions of the world. They explain more about the analysis: 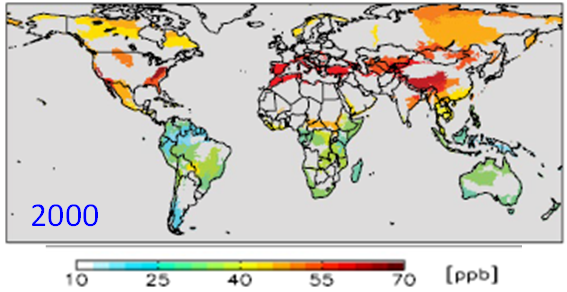 The global threats to agricultural yields posed by O3 have been quantified, but the implications for biodiversity at the global scale are much less certain and have had little recognition. This is an important gap because feedbacks from ecosystems to the atmosphere may change as future O3 levels increase or decrease, depending on air quality and climate policies.

Implications for biodiversity at the global scale are much less certain and have had little recognition.

In our newly published paper, we provide the first systematic global evaluation of the current and future O3 exposure of the Global 200 (G200) terrestrial ecoregions, which are priority regions for conservation. The regions have been selected for their irreplaceability and distinctiveness, and represent all the major global biomes.

About 40% of the G200 terrestrial ecoregions were exposed to O3 above thresholds for ecological risks, with highest exposures in N America and S Europe, where there is field evidence of adverse effects of O3, and in the Himalayan region and central Asia.

The biomes with the greatest mean exposure globally were temperate and coniferous forests, temperate grasslands, boreal forests and tundra.

Simulations for 2050 show that O3 exposure under climate change scenario RCP8.5 increases in all major biomes, and that the policies represented in RCP4.5 do not lead to a general reduction in O3 risks; 50% of G200 terrestrial ecoregions still show an increase in O3 exposure, with the greatest increases in and around the Himalayan region. The biomes with the greatest predicted mean increase globally were tropical and subtropical forests and grasslands, montane grasslands and mangroves. 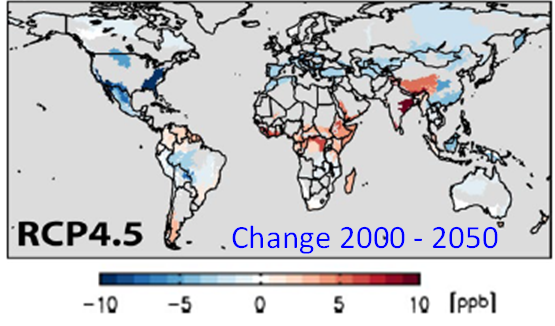 Above: Simulated changes in surface ozone concentration between 2000 and 2050 as a result of climate and emission changes for RCP4.5

Almost all experimental studies of the ecosystem effects of O3 have taken place in Europe and North America. These show that, although some communities can be resilient, O3 can adversely affect the growth and flowering of plants, alter plant species composition and richness, and change water flux regulation, pollination efficiency, and plant pathogen development. Recent research is also unravelling a range of effects belowground, including effects on soil invertebrates, plant litter quantity and quality, decomposition, and nutrient cycling and carbon pools, with implications for trace gas fluxes.

We lack a conceptual model to predict effects where there is no local information, and there is an urgent need for more experimental research in Africa, Latin America and, especially, in the rapidly developing countries of Asia. Nevertheless, there are likely to be O3 effects on biodiversity at different trophic levels, and on a range of ecosystem processes and feedbacks, in all ecoregions with high O3 exposure which deserve more attention in global assessments of the ecological implications of future atmospheric pollution and climate change.