In the UK we take it for granted that our work will be presented in English. However, presenting our work in English does not always allow us to reach the widest possible audience. This was all too apparent to two PhD students based at CEH’s Edinburgh site who realised that they could increase the exposure of their work by attending conferences in their home countries (Germany and Poland) and presenting their work in their native languages. As the students highlight to us below, this has been an enlightening and rewarding process.

The workshop “Lake remediation – Experiences and new challenges (Seentherapie - Erfahrungen und neue Herausforderungen) organized by the IGB Leibniz-Institute of Freshwater Ecology and Inland Fisheries (Germany) in March 2013 offered the opportunity to exchange and discuss experiences in the expanding field of lake remediation measures between experts from consultancies, agencies and scientists. Sebastian Meis presented the findings of his PhD study on the use of a phosphorus (P) binding and P-capping agent for sediment P-release management in shallow lakes in the session “Eutrophication control measures” (“Technische Maßnahmen zur Verminderung der Eutrophierung”).

Sebastian said, “This was a great opportunity to present my work in my native language, and to increase the exposure of CEH research more widely. The feedback on our work was very positive and I learned that similar projects are being conducted at a relatively large scale in Germany as part of the EU Water Framework Directive.”

Whilst in Gdansk, Poland, Justyna Olszewska was giving an invited lecture on CEH’s research on lake restoration to the Gdansk Water Foundation, in Polish. The Foundation organises seminars focusing on the "hot" topics in the field, and given 2013 was officially nominated “Lake Year" by the Marshal Office of Pomerania Region, this seminar was devoted to the subject of lake restoration.

Justyna said, “Introducing CEH’s lake restoration research in Polish was a very interesting experience. It allowed me to compare the results of restoration work conducted in the UK with the Polish experiences in this area. It was great to discuss management issues with Polish scientists and local authorities and we now have a much better appreciation of the problems shared by both countries.

"Being a native speaker was definitely helpful, both during the presentation and discussions, but also during the social events. What was evident was that literal translation of scientific terminology is not always possible, or clear, and that follow-up discussions are important for ensuring that the scientific content is properly communicated. In addition, gaining general knowledge of the environmental problems in my home country has helped me put my work in Scotland into the wider context.“

Dr Bryan Spears of CEH, supervisor of both Sebastian and Justyna, said, “I thought it was really impressive that Justyna and Seb wanted to present at these meetings in their own language. From the feedback we have had from both meetings it has clearly helped fuel debate and increase interest in our work.”

Copies of both presentations can be viewed at the following links:

Thanks to Sebastian Meis and Justyna Olszewska 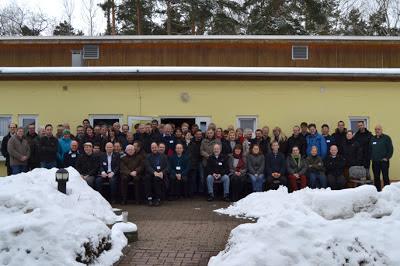