Tom Pottinger and Peter Matthiessen update us on recent research into the effects of chemicals on fish in river water:

The ability of fish to respond appropriately to natural stressors encountered in their environment is being affected by chemicals in river water. This new finding, reported by scientists from the Centre for Ecology & Hydrology in papers published in the journals Environmental Toxicology and Chemistry and Environmental Pollution, may represent another example of chemicals in the environment interfering with the hormone systems of animals – so-called endocrine disruption.

Defra-funded research conducted by CEH scientists in Lancaster has shown that three-spined sticklebacks (Gasterosteus aculeatus) living at sites downstream of wastewater effluent discharges in rivers in the northwest of England, release greater amounts of the stress hormone cortisol into their blood when subjected to a mild stressor than fish from sites not affected by effluent. The more effluent that is present in the river, the greater the degree to which the stress response is amplified (up to three times the normal level of cortisol is released after a stress event). 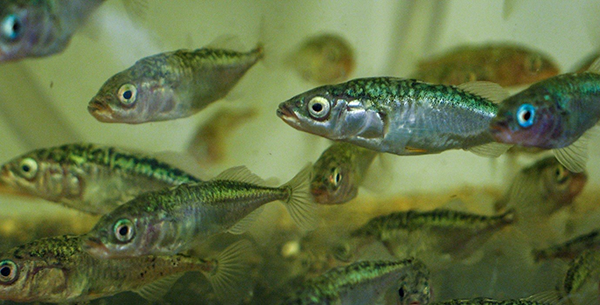 Above: Three-spined sticklebacks (Gasterosteus aculeatus). The wide distribution, small size, and abundance of this familiar fish make it an ideal model for field studies.

Initially, it was suspected that one or more chemicals among the cocktail of pharmaceuticals and personal care products of domestic origin that are present in treated wastewater might be responsible for these effects, in much the same way as estrogenic chemicals in wastewater effluent are known to affect the reproductive endocrine system of fish. However, scientists at CEH have discovered that modulation of the stress axis of fish also occurs at sites receiving little or no wastewater effluent. In these cases variation in the stress response is linked to nitrate or nitrite concentrations in the river water. 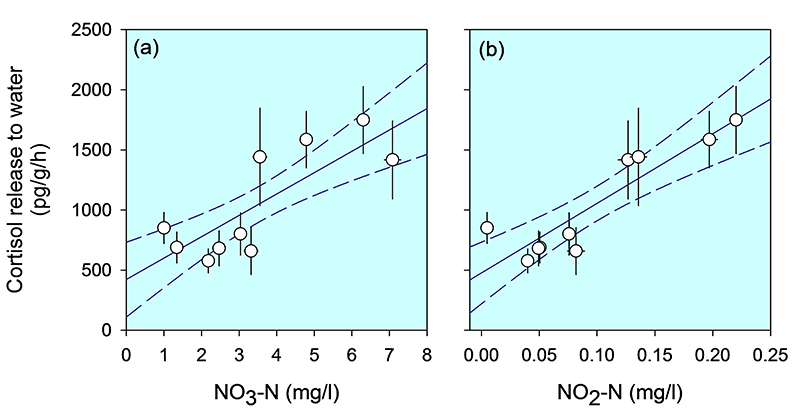 The graphs above show the relationship between the magnitude of the stress response (measured as the rate of release of cortisol) for sticklebacks captured at 10 sites in NW England and concentrations of (a) nitrate (as NO3-N), and (b) nitrite (as NO2-N) at each site. Each point is the mean ± SEM (n = 10). Best-fit linear regression lines are shown together with 95% confidence intervals (dashed). Regressions were conducted on full data sets but site means are plotted for clarity. Water chemistry data ©Environment Agency 2016.

Nitrate is a major anthropogenic contaminant in rivers, entering not only from treated wastewater discharges but also via other diffuse and point sources. Whether nitrate or nitrite are directly responsible for the effects seen, or are simply better indicators of the presence of the actual causal agents than wastewater effluent, remains to be determined.

Scientists at CEH have discovered that modulation of the stress axis of fish also occurs at sites receiving little or no wastewater effluent. In these cases variation in the stress response is linked to nitrate or nitrite concentrations in the river water.

It should be noted that nitrate and nitrite can affect the endocrine system of aquatic animals, possibly acting via the cellular signalling molecule nitric oxide (NO) but to date only one study (on alligators in Florida) has provided evidence that this might occur in free-living populations of animals.

Interference by chemicals with the normal function of the stress axis in wild fish, and vertebrates in general, is of concern for several reasons. The neuroendocrine stress response is a major component of the vertebrate adaptive repertoire and promotes survival during challenging events. It is of particular relevance where there are significant anthropogenic pressures on the aquatic environment and in a changing climate in which extreme weather events are increasingly common. Interference with the normal function of the stress axis can reasonably be expected to have adverse consequences for the individual, although given the diversity of systems influenced by corticosteroids the nature of these adverse effects is difficult to predict.

Furthermore, because all vertebrate animals, including humans, possess essentially the same endocrine system, the significance of these findings could extend beyond fish. 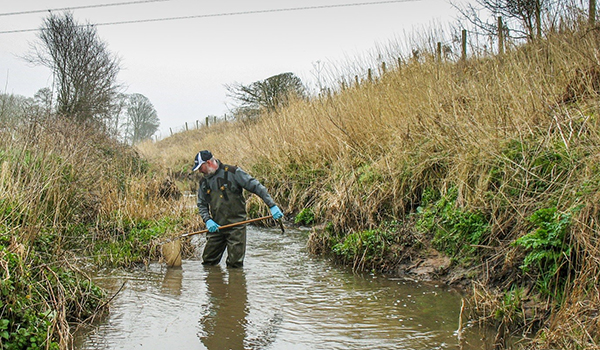 Above: Ben James (Centre for Ecology & Hydrology) uses a hand-net to capture sticklebacks in one of the Lancashire streams sampled for these studies.

Drs Pottinger and Matthiessen both highlight the need for follow-up research:

Tom said, “Modulation of the stress axis by anthropogenic chemicals is likely to be widespread among fish in rivers in the UK and elsewhere, and will almost certainly be found in species other than the stickleback. It is a particularly important issue for the UK because, as a consequence of our high population density, we have much less dilution capacity for wastewater effluent in our rivers than in most other developed countries. The urgent requirement for future research is to unravel the potential implications of these findings for the well-being and ecological fitness of affected populations of fish, and to pinpoint the pollutants causing this problem.”

Peter said, “These findings have similarities with the discovery during the late 1980s that the reproductive endocrine system of fish is disrupted by estrogens and their mimics in treated wastewater effluent, an observation which was among the first documented examples of endocrine disruption and helped stimulate research into this issue in wildlife and humans. Because all vertebrate animals, from fish to mammals, possess essentially the same hormonal mechanisms for dealing with stressors sufficient exposure to whatever is causing this effect could impact upon a large range of animals including humans. We think this is sufficient reason for further research on the subject to be conducted.”

Pottinger, T G (2017). Modulation of the stress axis in wild fish is associated with variation in dissolved nitrate and nitrite. Environmental Pollution doi:10.1016/j.envpol.2017.03.021